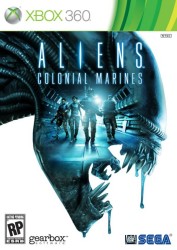 Other GamePeople columnists have reviewed this from their perspective - huh?:
Dressup Gamer (360) 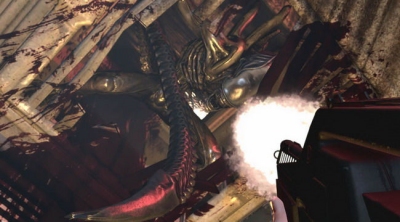 Aliens: Colonial Marines returns to LV: 426 after the Aliens film. Local and online cooperative modes sound like great fun, but are in danger of undermining Gearbox's ability to gnaw away at and disempower players to match the celluloid experience.

Aliens: Colonial Marines has me scared, but my fear is one of contradiction - simply put I am worried it will not be scary. The irony doesn't escape me, but my reasoning is sound. I loved the three Alien movies (lets make a deal to ignore forth one), each looked at a different kind of disempowerment.

Alien depicted a crew intimately aware of their environment, who discovered that their knowledge was unable to help them. Aliens showed how even a well-oiled military unit, with high-grade weaponry, could be taken apart by menace. Finally Alien 3 showed how a group of vicious, criminals could just as easily be killed, despite their violent tendencies and physical strength.

Now Aliens: Colonial Marines is set to revisit this rich tradition, and I think it will struggle to continue these themes, and that's if developer Gearbox even intends to try.

The game takes you back to LV:426, the planet where the Alien eggs were first discovered, and the main setting for the second movie. You are to take control of a troop of Colonial Marines, sent in to investigate what has happened to the earlier troops. Finding their ship, the Sulaco, adrift in space and the settlement of colonists destroyed by an explosion you investigate. Which, of course, turns out to be a bad idea.

This will be a tactical squad based shooter. In single player you will switch between the four squad members, while issuing orders to the others through context sensitive commands. Specific tasks within levels, such as securing areas, aim to recreate iconic movie moments.

The real challenge is for the game to recreate the claustrophobic feel of the movies.

Multiplayer will offer a four player online campaign and even two-players locally via a split screen mode. But it will be the acid-bleeding Aliens who will be the real centrepieces here. Though some licence is being taken to expand their variety from the warriors and queen to include worker drones and warriors. It's something fans may balk at but will be vital to the games success, forcing a broader range of squad strategy.

The real challenge is for the game to recreate the claustrophobic feel of the movies. Each film's masterful pacing and tension is something that games by their nature struggle to convey. Also, classic Alien themes like distrust or animosity between allies will be hard to create in a game where you have control of every character.

This is a balancing act that Aliens: Colonial Marines will need to nail if it is to stand tall with other elements of the cannon. The pacing needs to be slow and measured, resources scarce and squad members expendable for it to come close to the classic films.

On the face of it this seems a tall order for a game aiming for mass appeal. Bold design decisions and a genuine respect for the source material will be required for it to live up to my fond memories of the franchise.

You can support Alex by buying Aliens: Colonial Marines