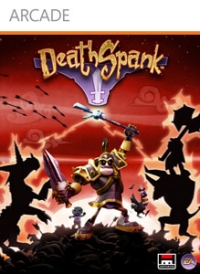 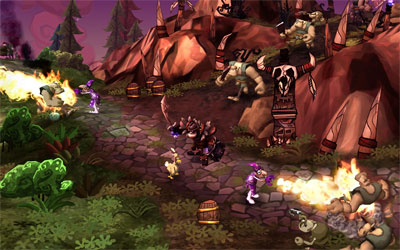 Deathspank's magpie looting charmed its way past my funny bone. Although often overly precocious, in the end it was too likeable to leave alone.

I've always been slightly suspicious of comedy. Not just because clowns make me uneasy, but because it's such a personal thing. Like fear, what really gets one person going will leave another cold.

I should have kept this apprehension in mind before playing Deathspank, but it sounded so promising. Ron Gilbert, co creator of the classic Lucas Arts adventure games, has proven he understands comedy in games. Gilbert's pedigree mixed with Hothead Games graphical style should be a recipe for comedy gold.

However, it only took seconds to see that I had been fooled by Deathspank's trumpet blowing. Predictable music and cut scenes barely raised an eyebrow never mind a smile. Perhaps a quest to find an artifact known only as 'The Artifact' is amusing to you, but for me it was too predictable - and not nearly as clever as Monkey Island's Big Whoop.

Deathspank's polished visual style did impress me though and the voice acting was strong enough to save much of the writing - even lifting the script from wallowing in the mundane at times.

I realised that Deathspank's charm had won me over.

But games are huge experiences with numerous facets, and Deathspank utilised its time and features to wriggle back in to my affections.

Game play is simple and repetitive but a combo system adds spice to the formula. A remarkably streamlined menu interface also surprised me, managing to circumnavigate many of the problems consoles have with these 'loot' based titles. Hothead Games elegant solution was to sidestep the issue and let the game automatically equip the best item.

I was soon having fun grinding my way through Deathspank. Old game references started to raise an inward smile and some of quips even saw that inner smile play briefly on the corner of my lips.

Three hours in I finally chuckled and I realised that Deathspank's charm had won me over. Although still rarely funny, the dialogue and inventive quests made it genuinely entertained. I even gave up nit picking about the game's instance on pointless tasks because they were framed so perfectly.

Deathspank isn't funny, but it is charming.

Deathspank isn't funny, but it is charming. Its self-aware humour does it no favours, but confidence and style combine to overcome this with a game that is hard to dislike.

Even when the grinding repetitive nature of the game play slowly begins to wear, I know that there is another inventive quest, well placed reference or fantastic turn of phrase around the corner to will make it all worthwhile.

You can support Alex by buying Deathspank