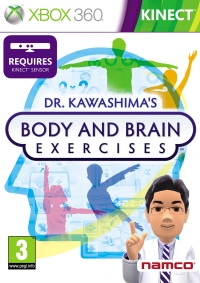 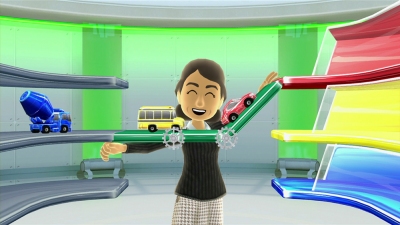 Dr Kawashima's Body and Brain is a stretch on Kinect, but what starts as frustrating soon emerges to offer a challenge that links mind and body.

Taking the incredibly popular Dr Kawashima's Brain Training from DS and transposing into 360 Kinect is not an immediately intuitive match. With the touch screen of the DS so perfectly suited to the mind games of the original, moving them wholesale to the less precise motion controls simply wouldn't work. Fortunately, Namco are aware of the dangers of the platform change and have forced the good doctor on to a treadmill to get in shape for an altogether more active set of challenges.

For those unfamiliar with the series it is something of an oddity. Selling over three million copies it is one of the DS's best selling games, but it isn't really a game. It offers a number of different mental exercises to help hone the mind. From maths problems to memory tests the software rated the user's mental acuity through an age rating and through daily play and practice.

The title of Dr Kawashima's Body and Brain Exercises is slightly misleading. During my time with the game it became apparent that while the new Dr Kawashima may demand more activity, it isn't really "exercise". Instead, a number of full body gestures are now required to complete the new games. Really the package could be better named "mind and body coordination trainer", but I guess that doesn't have the same ring to it.

Removing the familiar maths problems and focusing more on multiple-choice responses the new Dr Kawashima is a shift in emphasis. The new Body and Brain Training certainly offers a different challenge. Tapping buttons and touching a screen is a far more intuitive interface for these kinds of mental gymnastics. But in some ways this added complexity seems to complement the game's challenges, turning them from singular mental tasks into multitasking challenges.

Take the number ordering memory task. It is a clear premise; numbers appear on screen in bubbles before turning blank, with the goal of taping the bubbles in order from the lowest to highest number. On the DS memorising the numbers on the small screens before tapping the appropriate squares on the other screen felt simple and intuitive. With Kinect the goal is essentially the same, but how the player interacts dramatically changes the task.

It requires a slightly new way of thinking to succeed.

The numbers appears in a halo around you. You then use your arms to reach to the appropriate numbers. This motion feels comparatively unnatural and requires a slightly new way of thinking to succeed.

Some other tasks felt more appropriate to the motion control and proved surprisingly entertaining. Of those I tried my favourite was a bridge game where the goal was to move coloured cars to the corresponding road. In this game my body and arms acted as a bridge allowing me to collect cars on one arm and deliver them to their goal with the other. It was simple and appropriate to the controls which made it a lot of fun.

While the full body coordination is an interesting new direction for the series, Kinect struggled at times due to imprecise calibration or my imprecise movements. This is a little frustrating when you know the answer.

Despite the issues though, I found the single player an enjoyable challenge, and the multiplayer was something I would be happy to play somewhere between Just Dance and Trivial Pursuit at a family party.

Dr Kawashima's Brain Training requires some agile thinking if you are to do well. This is the interesting point though. What at first seems to be a frustration soon turns into a completely new challenge. Because it effectively links the mind and body you need to allow for some mental reprogramming before you start improving.

It effectively links the mind and body.

This makes it more engaging than I had expected, as well as providing more than its fair share of silly fun. If Namco can work out the kinks with sensor calibration this could open up the Kinect to the wider audience as it did for DS back in 2007.

Oh, the good doctor thinks I am 45 rather than my actual 30. Looks like I may need to buy Body and Brain Exercises when it releases in February.