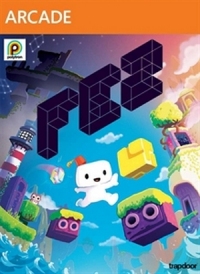 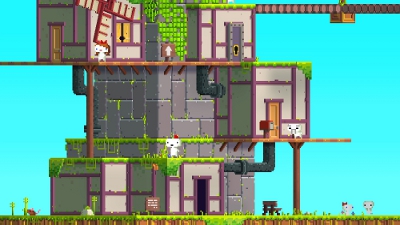 Fez blends 2D visuals and novel game mechanics to form a charming platform game. Scratch beneath the surface and much more is revealed. With an ancient language to learn and codes to crack Fez is unbelievably deep, and a horrifyingly daunting task.

Fez is a game of such creativity that from the instant I saw it I was eager discover what it had to offer. A 16-bit aesthetic may initially appear simplistic but once seen in motion its depth (literally and figuratively) soon becomes apparent. However, given the task of writing a guide for Fez my view of it complexities quickly turned from delight to exasperation.

Fez begins with the hero, Gomez, happily living his life in 2D. He has always lived on his little island but even this tiny environment has been limited to a single plane. It is only at the arrival of a cosmic cube (and its gift of a dimension shifting fez) that things begin to change.

Gomez is suddenly able to spin his world around three dimensions revealing sides of his island that he has never seen. Exploring this new ability shatters the cube scattering its fragments everywhere. Gomez must rebuild the cube; its 32 parts flung to other islands, the likes of which the young hero could never have imagined. (Ed: Flatland for videogames then?)

Mechanically it may sound complicated, but the act of navigating the world is strangely straightforward. Press the left bumper to move clockwise, and visa versa. My mind adapted quickly and within minutes even complicated manipulations of the environments were understood. Flipping the world around Gomez became able to move from one corner of the world to another, traversing impossible distances and obstacles by means of a simple rotation.

Fez is as much a game of cryptography as it is jumping.

Despite its mechanical ease, and the strange speed at which I grasped Fez's manipulation of dimensional physics confounded me. Problems did not derive from its mechanical function however, but from the world's scope and encoded history.

It's not open world in the strict sense, a quick look at the map reveals Fez's interwoven hub and off shoots. This scale and the complexity of the world made my attempts to construct a cohesive and efficient line through the game bewildering.

Fez's fiction is also of an impressive scope. It may looks like a simple platformer, but within hours of starting the game it becomes clear that Fez is as much a game of cryptography as it is jumping.

Fez takes perverse pleasure in the depth of its fiction and history. Chronicling a lost civilization, it often feels like the game wanted me to become a human enigma machine. Records of lost civilisation's music, science and writings are scattered through out each area, and it is left to me to decode them. It is only by breaking these codes that the game's larger secrets are revealed.

A glorious game of discovery, designed for inquisitive minds.

Constant revisiting of previous areas to decode a riddle or equation is the only way to find all of Fez's paths. Each barrier caused me a new frustration, as I took notes to mull over and reassess the best route through the world.

Fez is a glorious game of discovery, designed for inquisitive minds. Tackle it on this basis and it will both fascinate and intrigue you.

You can support Alex by buying Fez