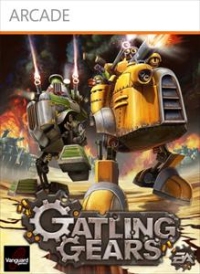 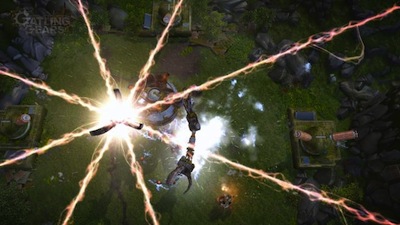 Gatling Gears is a twin stick shooter that maintains a sense of pressure and insecurity throughout. It worked well for me as it managed to keep the stress high and the action fun.

Some games set me on edge, by creating tension through uncertainty and difficulty that get my palms sweaty and make my pulse race. Gatling Gears is one of those games, and I am still not a hundred percent sure why.

Jumping back into the Mistbound universe that I last visited in Greed Corp, I was shocked at how it had changed. This is no longer strategic warfare, I am not guiding one army against another and nor am I ravaging the land I hope to save like some horribly misguided eco-terrorist. Instead Gatling Gears is twin stick shooter, placing me on the frontline of combat.

My struggle seems reasonable as I jump in and start mowing down challengers. I have been attacked without warning or provocation, so I fight back in self-defence. Then reaching the end of the level I am faced by the truth, the incursion on my Empire's base was from a group known as the Freemen and upon reaching their village my partner sets about decimate their unprotected village. I refuse and defect from the Empire to commune with nature.

It is an unsettling topic, made even worse when juxtaposed against Mistbound's jovial nature. Both Greed Corp and Gatling Gears have a charming steam punk style with adorable squashed down robotic craft that would equally at home in Disneyland. But where Greed Corp felt dirty because I was a detached general who abused nature to win the war, Gatling Gears casts me in the action directly killing my opponents.

It is an unsettling topic.

They are remarkably distinct mindsets that highlight the difference between a frontline solider and an officer. The cold detachment of leadership disturbed me but gave me time to think, being in the battle conjured something entirely different. Gatling Gears has a far more desperate edge that left me reacting to events rather than considering them, with no time to think of Mistbound's eco-friendly message. Being a lone warrior in the thick of battle and constantly under fire is a terrifying thought but one made all the worse by not knowing when it will end.

It's this that really got to me. I am never sure when I will reach the end or how to distribute my recourses. Moving from jungle, to mountains, to military instillation, each stage seems to vary in length dramatically making it impossible to judge the best time to use my one electrical attack. It is a balancing act that has me panicked as I fight, as I know a mistake will mean failure.

It is a problem compounded when I reach a boss, huge multistage machines that guard the end of each environment. These weapons spew gunfire that fills the screen. My slow moving two legged mech dodges and weaves but with no way of gaining more health during these fights it is always a close call. Constant openings offer me the chance to take more of my opponent's health, but they leave me exposed. Tantalisingly close and I am forced to continue my dance for pulse-racing minutes if I hope to secure victory.

It's this strange uncertainty that I rarely find in games, and I one that can't fully locate the source of in Gatling Gears. Perhaps it is the varying stage length or the difficulty that is constantly testing me, only just letting me prevail. Either way it is surprisingly effective, and strangely enjoyable.

You can support Alex by buying Gatling Gears