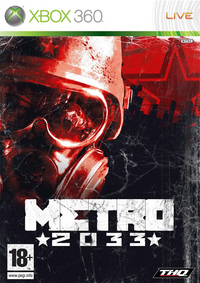 Other GamePeople columnists have reviewed this from their perspective - huh?:
Story Gamer (360)
Dressup Gamer (360) 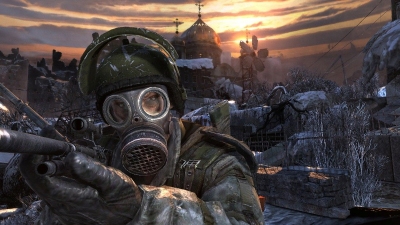 Metro 2033 welcomes players into a nightmare, post apocalypse Moscow, fear and terror lurk around every corner.

Metro 2033 has cured my vertigo. Even at its most dizzying elevations I did not give the precarious positions I found my character in a second thought, in A4's first person shooter. Unfortunately, it has managed to replace my fear of heights with an unreasonable fear of confined spaces, thanks to its oppressive, immersive world.

After nuclear war in 2013, Moscow's remaining population has taken refuge from the surfaces lethal radiation, surviving in the tunnels of the city's metro system. It is a dirty grimy world, but not without charm. Starting in a single small station, there is a sense of warmth, camaraderie and (despite the population having been underground for twenty years) hope.

Ambient noise surrounds me in the Metro. Laughter and arguments, from people unseen, echo through the concrete corridors. Moving through the world I am greeted by everyone I pass. I feel part of this world. Despite the low ceilings and cramped living conditions, it feels homely. Safety offered by this sense of belonging is quickly robbed from me as mutants attack the station. Feral beasts flood through the air ducts, their appearance something between wolf and human. I fight, side by side with my father, to defend my home from the invasion.

Perhaps I have played too many games of this type, or maybe I am just a pessimist, but I spent the whole opening waiting for something disastrous to happen. For my father to be killed, or for our efforts to be in vain and the station overrun, but no such thing happened. We repelled the creatures, and even with my father's speech about the hopelessness of our conflict with he Dark Ones, there remained a sense of victory.

Separated from the friendly buzz of home, the oppressive nature of the environment fast became apparent.

It didn't take long for Metro 2033 to rob me of this confidence and elation. Soon after the skirmish in my home station I found myself moving through the tunnels towards another station. Separated from the friendly buzz of home, the oppressive nature of the environment fast became apparent. Only able to move forward or back, anything that attacked was funnelled towards my party, and when the mutants came they made short work of catching up to our handcart. Our substandard ammunition struggled to damage the oncoming swarm.

Thrown from the cart, I watched the others fight on from afar, before realising if I didn't rejoin them I would soon drown in the torrent of on coming deformed bodies. Running through the darkness towards the light of the handcar, my friends call to me to keep running and not look back. Scared, I obey, and it is only when I find myself safely within their cover fire that I turn and see the wall of monsters that had pursued me.

While this first encounter gave me a taste of what lay ahead, it was only when I separated myself from the group to continue on my character's path that the enclosed isolation of this world started to truly trouble me. Alone in darkness with only a hand cranked flashlight to illuminate the way, my trepidation grew. Uneasily, I moved through the gloom. The suspense built and the oppression became ever more suffocating. Edging forward, I waited for an attack that never came. Blackness closed in, and I pulled out my hand crank to recharge my flashlight. As I pumped I could hear the dynamo inside the little power supply spin. Once at full charge, I relit my tiny torch and crept on.

Panicking, I pull off the mask to fill my lungs with air that isn't there and drop to the floor.

Eventually I saw light, not the dim fluorescent glare of the Metro, but natural light spilling in to the tunnel. A sense of relief washed over me; soon I would be free of the ink that had enveloped me for so long. With a newfound partner I emerged into the sun. Gasping for air, my guide yelled at me to put on my gas mask. Hitting the G key it pulled over my head. Cracks in the corners of my vision showed me just how fragile the shield between me and asphyxiation was, attacks weakened the glass still further, but I pressed on.

After what feels like hours in the claustrophobic gas mask, breaths become laboured. Around the edge of my display I see droplets of condensation begin to form as the recycled air inside the tiny shell fills with moisture from breath and carbon dioxide. I hit T to check my watch; it tells me I am nearly out of air. I hit G again to change filter in my gasmask, but I had exhausted the last one minutes ago. Frantically I search around for an unspent filter among the skeletal remains of Moscow. I see none. My own rasping gasps for air fill my ears. Panicking, I pull off the mask to fill my lungs with air that isn't there and drop to the floor.

Memories flood back of the claustrophobia, not of the tunnels themselves but of being trapped in the stifling mask until those last gasping moments.

Back at my 360 I stand up. As I put the lead on my dog I consider the mutant derived irritation - how they seem to exist at a height just below the line of sight, and how in every encounter I feel ineffectual against these ghoulish opponents. Looking for my keys, I reflect on the social groups the game pits me against - Nazis, communists, bandits, all in conflict depicting the diversity of life beneath the streets of Moscow.

Finally, with a cold chill as I head to my door, memories flood back of the claustrophobia, not of the tunnels themselves but of being trapped in the stifling mask until those last gasping moments. I want to go back to the Metro and its on rails story, but I think I am going to enjoy this walk in the fresh air first.

You can support Alex by buying Metro 2033