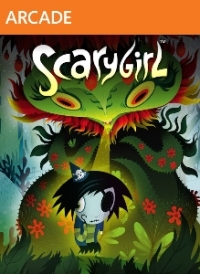 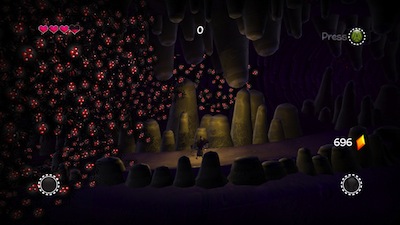 Scary Girl's fairy tale may look cutsie but is as unnerving as any game I've played this year.

Scary Girl is a 2D platform action game that sends a young girl on a quest to find the man that haunts her dreams. While the cute style may initially make the title feel jovial or light hearted, the deep and often tense gameplay soon reveals it to something a little darker.

Starting a game for the first time it is hard to know what my emotional response will be. Titles with grim story lines all too often do little to perpetuate their oppressive tone, while lighter games can set my heart racing. Scary Girl manages to come a full circle, setting a tone with its name that is soon upset with its graphical style, before being reaffirmed the mood with its game play.

Girls can be far scarier than men.

The name had me intrigued before I started. For me girls can be far scarier than men. I was hoping Scary Girl would capitalise on this, creating a chilling female presence. However, what I got was any thing but, with the young heroine a grey toned Burton-esq creation.

Scary Girl's story is told through a charming fairy tale intro. An orphan with no knowledge of here past, she is taken under the wing (or tentacle) of an octopus who raises her. The two become firm friends. Her eight-legged friend dresses Scary Girl in whatever he can find in the ocean depths. This gives her a distinguishable almost pirate like appearance, going as far as having a hook for one hand and a tentacle for the other.

Despite her disparate adornments Scary Girl's appearance is far from threatening. Her large head and eyes almost give a sympathetic edge more akin to a puppy than anything more insidious, while the mismatched appendages make her seem in some injured rather than threatening.

As she grows Scary Girl becomes plagued by dreams of a man and decides to set out into the world, away from her tree house and mollusc friend, in search of these memories. It is here that the action begins. Jumping into a 2D platform world filled with cute animals (who function as enemies), my hope that Scary Girl would somehow turn out to be terrifying femme fatal was quickly dashed.

With an aesthetic reminiscent of Mario or Sonic, the first area felt like a cute platform game. Jumping through these early levels the weak enemies quickly succumbed to my hook and tentacle strikes, as Scary Girl appeared more than capable of finding the way to the man in her dream with little more than the occasional nudge from me.

Then everything changed. Rapidly, more complex control mechanics were introduced. Combo attacks, grabs and all manner of other moves built upon the core jumping and hitting dynamic. I was forced to carefully manage my actions, grabbing and flinging one enemy into another would sometimes be the fastest and safety way to victory, when at other times squeezing the life (literally) from my opponents would gain me much needed health. Ever more difficult and branching paths also became slow introduced, making me perform precision jumps and swings to find my way through increasingly challenging levels. Put simply, Scary Girl got hard.

From a cute little adventure taking a young heroine to find the man in her dreams and (probably) discover her past, I found myself becoming ever more tense as I tried to make my way forward.

Part of the challenge came from searching each of the collectibles scattered throughout each levels, all placed tantalisingly out of reach. But even taking a more direct route I all too often found myself down to my last piece of health, eyes wide and breath held, as I made my dash for the next checkpoint.

I found myself becoming ever more tense.

Bosses proved equally nerve racking. Huge, cute creatures that stomped through the world damaging Scary Girl almost by accident. I had to utilise the game's considerable repertoire of tricks in order to defeat them. Requiring timing and skill these battles revealed, more than any other, the classic gaming heritage that Scary Girl's designers drew upon; making it more akin to a traditional Ninja Gaiden or Bionic Commando than its cute looks suggest.

You can support Alex by buying Scary Girl