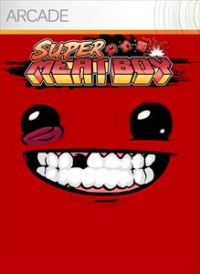 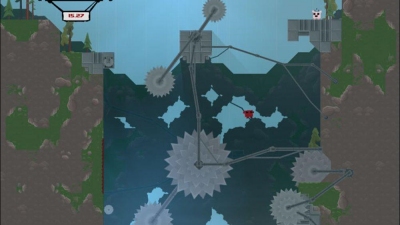 Super Meat Boy's bloody challenges enticed as much as they enraged. By turns frustrating and entrancing, the perfection of the execution is as undeniable as the need to complete it.

Team Meat was behind the addictive, if slightly undercooked, browser based platformer Meat Boy. They return here having finished roasting their game in the XBLA oven to create Super Meat Boy.

Keeping the precision jumping of the original, and its punishing difficulty, the new downloadable release improves controls, graphics while accentuating their nostalgic flare. This is a perfect throw back to the era of games it replicates.

Games can be filled with scares. Some can muster fear from unexpected places if you let them, but the ones I find most terrifying are those that reveal something about me. Such titles peal back the layers of the carefully constructed shell in which I hide to reveal parts of me best left hidden - my more obsessive or easily angered sides.

Super Meat Boy tapped into many all these (and more) negative personality traits. It drew from me the obsessive compulsion that I exhibited in my youth. It forced me to leave nothing unfinished and when I was beaten by a task, it awoke a juvenile anger.

But as much as Super Meat Boy forces my negative traits to the fore, I could not help myself becoming completely and instantly transfixed by it. Finishing each of the short levels the game flung at me became an addiction, which both infuriated and delighted me, thanks to the games perfectly pitched level of challenge.

Cursing the game, seconds away from ripping the hard-drive from my 360 and micro-waving it.

Filled with a thousand different ways to die Super Meat Boy taps in to the now re-merging 2D pixel perfect platformer. They were a genre I once loved. The precision required, and time taken to master it, were a joyful challenge when I was younger. Now though something has changed in me and (be it a lack of time or lack of skill) I find myself constantly on the edge of my seat cursing the game, seconds away from ripping the hard-drive from my 360 and micro-waving it.

But no matter how enraged I become with Super Meat Boy it was never long before I returned. Whether Meat Boy is smashed, ground, liquidised or fried there is always the sense that the blame fell squarely on me rather some arbitrary trick of the game, thanks the responsive controls.

Guiding the small blood bag, Meat Boy, through the trap infested world in his attempt to rescue his girl friend, Bandage Girl, from Dr Foetus, his constant deaths are mediated by the sheer joy of success when a level is vanquished. But the real catharsis here is having my failed attempts played back to me at the end of each level. An explosion of Meat Boys fills the screen and slowly, one by one, are whittled away until a single tiny sprite reaches the goal. It is the sort of ridiculous therapeutic theatre that games are unique in creating.

If the classically styled gameplay alone was not enough to convince you that Super Meat Boy is a game designed by long term gamers it also goes out of its way to give a nod to its inspiration and peers. As a fan of smaller downloadable titles the cameos from other indie developer's creations (who appear as unlockable characters) prove irresistibly charming.

But even these touches are all bested by the warp zones. Each zone carries Meat Boy back to a previous generation of gaming, thrusting him in to mock Gameboy, Spectrum, Commodore and all manner of other games. Lovingly realised stages set a perfect tone and the gameplay also altered to suit their respective eras, yet maintain the difficulty. It is a beautiful (if unexplained) aside that offers nostalgia to long time gamers and a bizarre education to new the newly initiated.

Super Meat Boy manages to do just enough to mediate the frightful anger it inspires.

Super Meat Boy manages to do just enough to mediate the frightful anger it inspires, preventing the oft-considered controller hurling rage. In a way I find each level a pleasing release, never presenting a challenge that is insurmountable, even if at times it feels like it is.

Despite of the disturbing aspects of my persona it seemed to awake, there is a real sense here that, yes, I can do whatever I set my mind to. This is a feeling so frequently lacking from real life for me. I suppose it is an acquired taste, designed for those either gifted at gaming or simply persistent and masochistic, but don't be too quick to walk away from the dark bloody tunnel on offer here.

You can support Alex by buying Super Meat Boy