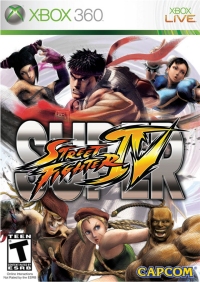 Other GamePeople columnists have reviewed this from their perspective - huh?:
Family Gamer (360)
Perpetual Gamer (360)
Returning Gamer (360) 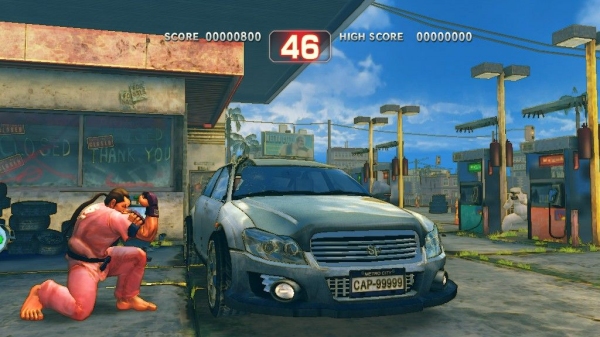 Super Street Fighter 4 suckered me with my own nostalgia. It is undeniable worth the price, retailing at just twenty-five pounds; it adds a plethora of new characters, re-balancing, improved online and the return of bonus rounds. But I have reached a time in my life where getting friends around to play games is rare and random online matches become increasingly intimidated, so I feel duped by Capcom, because I am never going to play it how I want to.

It almost feels like the purchasing the newest instalment of Capcom's seminal brawler was a learned reflex, an innate responses to years of conditioning. Every revision of Street Fighter 2 was a day one purchase. Each tiny update would consume weeks of my life. Tucked away in my bedroom on a fifteen-inch monitor I would happily fight my way through the game time and again, heedless of the repetition that would bore me today.

Despite the hours I would pour into the single player Street Fighter 2, it was the multiplayer that was the true focus. Every weekend my friends and I would play for hours together, honing our skills. Every match was close fought and entire days would be lost to the back and forth of matches. It is in the changing of my own life that my problems with Super Street Fighter 4 arise, as none of it is conducive to replicating these found memories of my past.

Today's gaming climate has moved the competitive multiplayer of Super Street Fighter 4 online. Technically there are no obvious problems with the move to remote opponents - although it's not as satisfying as a local match - lag is rare and there are a host of different play options available. My problem with this shift is that I am simply not good enough.

When I bought the original Street Fighter 4, I began on the same foot as most players. I would win a little under half my fights, and would even find friends who also had the game available for a few rounds. But where the last game rode on a crest of nostalgia, the new instalment sees few of my causal gaming friends investing again. This leaves me struggling to keep up with more dedicated combatants, who committed themselves to mastering the game, and who I have long since fallen behind.

None of the physical jostling and sense of competitive pride that made the series so special in my youth is emulated online.

I find jumping into random games a terrifying experience. Re-balanced and new characters has done little to help me claw back ground against the ever growing number of skilled players. It saps my desire to play, as every round turns into a new way for me to be slaughtered. Without the time to really master the new roster (all of whom are fun to play with in single player), I am stuck returning to my old favourites Ryu, Guile and Zangief. It makes little difference to the results of each match though, but at least the familiarity of my virtual partner goes some way to alleviating the horror of playing online.

In buying Super Street Fighter 4 I was really holding out hope, perhaps naively, that I could recapture some modicum of the experience I used to have with my friends all those years ago. But without my friends sat with me, and balanced levels of competition that come from days playing together, the online replacement just doesn't offer the same appeal. None of the physical jostling and sense of competitive pride that made the series so special in my youth is emulated online.

It saddens me that I may never recapture the joy of my younger years.

Undeniably Super Street Fighter 4 is a refinement of every instalment to date. So much is crammed on to the almost budget priced disk that it is hard to not see the value of what is on offer. But, as an adult who wants to experience a wide range of game I am unable to dedicate myself enough to be competitive against the online elite, thus I am left waiting for friends to one day pick it up.

It saddens me that I may never recapture the joy of my younger years, but it is somehow still comforting to have the game, just in case a new challenger - or old friend - approaches.

You can support Alex by buying Super Street Fighter 4