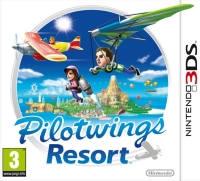 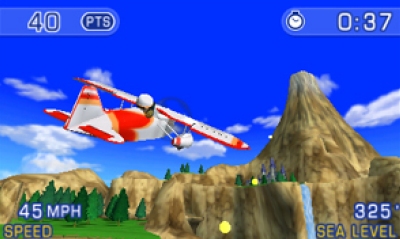 Pilotwings Resort is Nintendo's light-hearted 3DS flight simulation that provides a perfect opportunity to show off just what the 3DS can do. No huge scares here, unless you are sensitive to sheer drops, high speeds and generally running out of fuel a few thousand feet in the air.

The original Pilotwings hit the SNES in 1992, and I loved it. It oozed fun. In its task of teaching me to fly it began with some degree of sobriety; skydiving, bi-planes and hang gliders making up the early tasks. It didn't take long however until I saw myself with jetpacks, birdman wings and penguin suit. I then finally received my full flight licence and was allowed an attack helicopter.

It was one of my first console games, and I sunk weeks into finishing it. Now, it comes to the 3DS as Pilotwings Resort but I am worried it can't live up to my memories.

Like the original's demonstration of the SNES Mode-7 effect, Pilotwings Resort exists in part to prove the 3DS's graphical prowess. Both games offer the same revelation to the eyes and as I start playing I am truly wowed by what I see in the screen -- because it really is in the screen now. I no longer feel like I am looking at a flat image. The digital world falls away before me as I soar above it.

I am unnerved at how completely I tricked myself.

Swooping and diving around Pilotwings' imaginary Wuhu Island I am captivated by the tiny screen thanks to the illusion that 3D produces. Long integrated strategies I've developed to judge videogame depth are instantly replaced by natural perception.

Gone is the need to follow the shadow of my craft, I'm now able to judge my position in space accurately. Slowly I realise just how many mental gymnastics had become commonplace to accommodate false illusions of depth, and I am unnerved at how completely I tricked myself. But as my shock at the 3D effects subside I realise there is something lacking.

But completing the first few stages it is clear that something is different about this new Pilotwings. Where I used to feel a constant exhilaration from the introduction of new crafts and challenges, everything now seemed to be stagnant. Perhaps it is just rose tinted glasses, but back on the SNES I remember a constant string of new challenges and surprises rather than the repetitive tasks that Resort sets.

Pilotwings Resort breaks down its missions in to three broad categories (planes, hang gliders, rocket belts), each containing a few different craft that control similarly. For example the hang gliding class has a traditional hang glider (requiring well timed dips and swoops to control) and a glider bike, a machine similar in concept to the regular hang glider but with the additional advantage of peddal powered propellers to give a little extra power when needed. Unfortunately this strict categorisation makes it all a little predictable -- there is precious little to spice up the action.

I am unnerved at how completely I tricked myself.

I went between each task, flying through hoops or landing on targets, but the joy of the original was absent. Where I used to find new adventures I found predictability. The joy of discovery, like finding the penguin suit, had been replaced by Nintendo's desire to make everything familiar to a broad audience.

This homogenisation robs Pilotwings of what made it special. There are still moments of joy, but its carbon copy nature feels bland by comparison to the series' roots. Once the wowing effect of the 3D passes Pilotwings Resort is left as an entertaining game that is designed to be inoffensive and predictable, a letdown for me as a fan of this once outlandish series.

You can support Alex by buying Pilotwings Resort