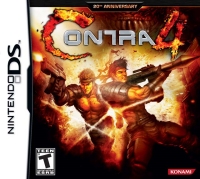 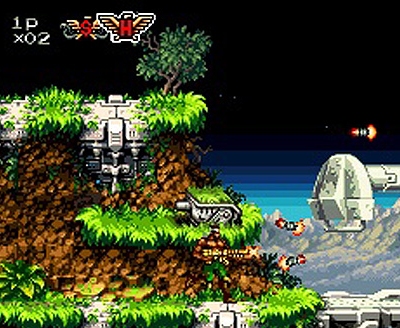 Contra 4 DS enticed me back to an alternative future where pixels and sprites continued to reign. It's entertainment that I don't think I'll ever complete, but I certainly enjoyed the trip.

Spin-offs, side stories and alternative histories make it hard to keep track of some franchises. But with Contra 4 Konami are returning this franchise to solid ground by disregarding the bizarre naming conventions and game play of recent instalments.

It presents as the follow up to 1992's Contra 3 in a way that makes a lot of sense to me. Post SNES Contra games shunned sprites and dropped numerical monikers in favour of 'extreme' subtitles. These later games never attracted me, or drew the same praise as the classics. So Konami's decision to allow developer Wayforward to adopt the numbered mantel for their sprite based DS title was a silent promise that they were returning the series to yesteryear.

It is nothing short of incredible. Contra 4 is a love letter to Contra fans. Borrowing heavily from previous instalments the aesthetic is unmistakably SNES, while levels felt like a greatest hits collection from the series.

With its obscene difficulty curve Contra 4 felt instantly familiar. A strange mix of pattern recognition and twitch reactions, every second offered a plethora of ways to die. A tiring mix of concentration and adrenaline filled me. With limited lives the tiny 2D platformer is a lesson in persistence. If you aren't willing to dedicate yourself to learning its patterns you will be hard-pressed to even pass the first level.

Fortunately, Contra 4 is aware of its demanding nature and does enough to help players. Most notable is the easy mode that keeps the frantic nature of play manageable. Finish the game on easy and you discover that the final boss battle is locked and you are instantly back in the saddle playing through on normal.

It continues to reside there next to Metroid Prime 3 and other games I am proud to own, but reluctant to revisit.

At the same time Challenge mode is unlocked and offers multiple tiers of bite sized tasks to perform. Failure to meet an objective quickly results in a retry. Despite a rising sense of frustration and anger at my own inability to master these tasks they locked me into the subtle nuances of the game. Patterns became second nature; avoidance and timing slowly drilled themselves in to my consciousness until I became confident enough to face the game on Normal.

Even with my new learned skills the step up was taxing. After navigating the first, familiar, level with some ease I moved to the second stage where the vertical nature of the game, traversing both screens, continued to unleash unnoticed surprises on me from above. It's strange how ingrained the old Contra's game mechanics have remained in my mind, that even the fairly small addition of a more vertical playing field could so completely confuse me.

Contra 4 is an amazing throw back, which you are unlikely to ever finish.

Slowly I progressed, screen-by-screen, replay-by-replay, until finally I reached an impasse. Around the sixth level on normal I found myself unable, or perhaps unwilling, to force more pain upon myself. Something had snapped inside me and the prospect of restarting again was too much.

Removing the cartridge from my DS I quietly returned it to its case and flung in to the back of the wardrobe. It continues to reside there next to Metroid Prime 3 and other games I am proud to own, but reluctant to revisit.

Contra 4 is an amazing throw back, which you are unlikely to ever finish. With the original Contra and Super Contra games included, as well as a two-player mode - there is plenty of entertainment here. While the run and gun game play remains fresh for sadistic newcomers to the series, they may scratch their heads as they try and finish it in vain.

Ed: Contra 4 is not available in the UK, however the Konami Classics Series DS offers access to the original game.

You can support Alex by buying Contra 4