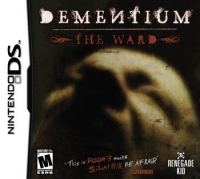 Dementium: The Ward manages the impossible, a full 3D survival horror on the DS. In hand though it is unclear whether we really wanted this. Clever ideas and atmosphere wrestle with the small screen and dark visuals to make their impact. There are strong moments here, provided you find a secluded spot in which to play.

The idea has long been held that 'scary' just isn't effective in the conditions most people play their handheld games. Dementium: The Ward combats this with impressive atmospheric on the DS. The First Person Shooter boasts an impressive 60 frame per second in full 3D. The game is technically impressive for the Nintendo DS. The challenge is the one this it has no control over - where it is played.

Stood on a busy rush hour train in Japan I am jostled by fellow commuters and shaken from concentration. The experience of Dementium: The Ward played there is pretty mundane. It does very little to aid any suspension of disbelief, the painting of a fiction that can sweep me way from the realities of my life needs a little quiet. While I try my best to forget myself, the two tiny DS screens prove a challenge.

Even on days when I am willing to sacrifice the sounds of my mp3 player in favour of game sounds the experience is never something I would describe a immersive. Clutched twenty centimetres from my face, Dementium is doing its best to grab me. In one hand I hold awkwardly my stylus to direct my flashlight, while my other hand does its best to manipulate the buttons without relinquishing its grip on the small machine. The train stops, worryingly few people get off. Twenty bodies rush in to fill the space of the three people who left, many of them jostling me for position. I pause the game, reposition myself towards the wall for protection, and continue to play.

I progress on through the game's hospital setting, tiny polygon zombies are muddy but suggestive of something dark in the way they shuffle.

I progress on through Dementium: The Ward's hospital setting, tiny polygon zombies are muddy but suggestive of something dark in the way they shuffle - an illusion that struggles when seen in duplicate. The single foes leering gate becomes more like cabaret when a bunch perform the same step together - perfectly in sync.

I switch my light for a gun, my vision is reduced to a few meters and I shoot where I remember the polygons being. Switching back to my light I see they are dead and move on.

Train stops and the pressure behind me is mercifully relieved.

Every door I try and interact with. The story is intriguing and has grabbed me with its ambiguity. I awoke in a hospital confused, disorientated with darkness all around. I imagine my character wearing surgical robes, unprepared for the horrors he faces. But it makes his door searching ridiculous. Why not head to the safety of the lowest level and make his exit out the nearest window. Instead I have him looking for clues as to the events around him, and risking his life against all manner of monsters.

I die, curse and slam my DS shut. A foot shorter than me, the guy behind me looks a little scared. Not the ideal environment perhaps.

I move to the corridor that bridges the facility's two buildings. I hate these areas. Dementium: The Ward's gritty textures and poor draw distance do little to help as the disembodied heads fly screaming at me from the darkness. I cant decide if these are truly scary, or if its just the fact that fifty percent of the times I have met them they returned me to the start of the stage. Hearing their cries sets me on edge. I can't out pace them, so I progress shotgun in hand, hoping I can get off an accurate shot as they come hurtling out of the darkness.

I die, curse and slam my DS shut. A foot shorter than me, the guy behind me looks a little scared. Not the ideal environment perhaps.

I do remember playing my old Game Boy by torchlight under my duvet, more involved than even the best high definition games could achieve. Dementium: The Ward may not suite my commute, but it has shown enough to know that in the right setting it could be gripping. The scariness has to make its way through the fiddly controls, muddy visuals and punishing difficulty. But perhaps the fact that there are still glimpses to be had is testament to the game that lurks beneath.

You can support Alex by buying Dementium The Ward