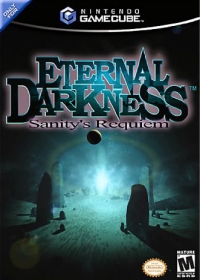 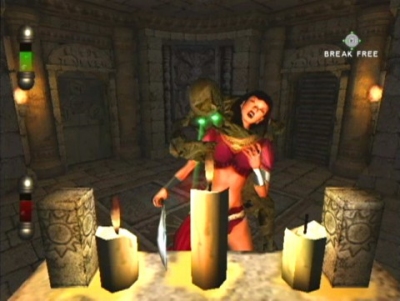 Eternal Darkness scared me. It appears to be a shocks and jumps horror game, but is in fact something much more disturbing. By the end I felt like I'd been as much a victim of proceedings as the characters I was playing.

Eternal Darkness is a third person survival horror game from Silicon Knights, with a heavy leaning on psychological scares. Casting the human race as pawns in a war between three Cthulhu inspired gods, the story jumps back and forth between a number of characters. At the hub of the story is Alexandra Roivas, a young woman who inherits her uncle Edward Roivas' estate. She soon discovers pages from The Tomb of Eternal Darkness that start to piece together a supernatural narrative of each historical character's descent into madness.

Eternal Darkness is played in just a few locations, but at different points in history. Visiting Aztec ruins in the present day is interesting, but having previously seen the pyramids in all their glory makes it all the more meaningful. With each shift in time come different weapons and visual decay.

Each character's tale took me through unnerving imagery and shocking narrative twists - but this wasn't the real horror of the game. Had Eternal Darkness merely seen me hacking my way through the monsters it would have been a forgettable experience.

Instead, Eternal Darkness transcended its story by playing on the growing insanity of each character. These sanity effects slowly grow through the game as exposure to the world's demons send characters mad. But it's not just inside the game that this madness takes effect - their dementia seeps into the fabric of the game.

It was a strange experience, and one that I was not prepared for.

It was a strange experience, and one that I was not prepared for. Mechanically it is straightforward, as the characters witness the horrors around them their psyche slowly breaks down. When it gets too much they become prone to delusions and hallucinations.

Initially the game built expectations of what to expect, mundane visual effects that warped my perspective, putting the world disorienting eschew but ultimately harmless. Slowly this increased. Events would loop, throwing me back to the start of areas I though I had successfully navigated, characters would shrink as they ran down corridors making enemies and the environment appear enormous. Effects even went as far as my character's head and limbs falling from their body leaving me in control of a shambling corpse.

As the game progressed this began to encroach on interactions with the game. With false system messages manipulating my expectations, Eternal Darkness drew reactions from me based not on what my characters were experiencing but what I was seeing as a player. There grew a blend of tension and wonderful manipulation that set the very technology I was playing with against me.

There grew a blend of tension and wonderful manipulation that set the very technology I was playing with against me.

Of course, I am being deliberately vague here, you need to experience this fresh and first hand to get the full benefit. I know this is a rare game - the Gamecube's lack of traction made sure of that. But with the Wii's backward compatibility there's no reason not to go back and play it.

Eternal Darkness breaks all the rules of gaming, but in an intended and unsettling way. It harnesses your expectations as a player to create a real sense of unease. And all the time the central game mechanic itself is used as meat to draw you on through the experience.

You can support Alex by buying Eternal Darkness: Sanity's Requiem