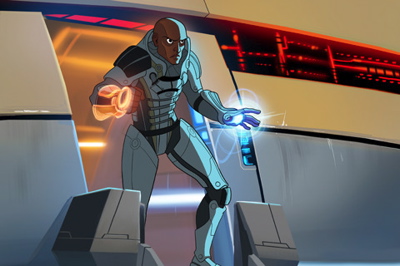 Mass Effect Galaxy, like the books, is a great way to extend your Mass Effect fix beyond the main cannon. On iPhone, iPod Touch or iPad this is unashamedly the Mass Effect Universe, although here with its wings severely clipped.

For gamers who can't wait till they get home to immerse themselves in the richness of the Mass Effect universe, Mass Effect Galaxy brings some of the franchises most enjoyable aspects to the iPhone. The reliance on player/character dialogue is still there, but it doesn't have the same impact in Galaxy that it does in the main console versions.

Mass Effect drew me in fully. Every choice carried with it weight and tension, forcing me to make decisions with far reaching ramifications, the results of which were frequently left until much later in the game to be revealed. Because of this I found myself glued to every snippet of dialogue. When the iPhone (and iPod Touch) title, Mass Effect Galaxy, hit the shelves I was unwilling to revisit its complex universe without the original character I had poured so much of my time and energy into. However, with the release of Mass Effect 2, and my discovery that finishing the diminutive title would reveal content in its big brother, my interest was peaked.

Galaxy is fully aware of the limits of its hardware. Rather than attempting to extract the whole Mass Effect experience, it is distilled down to two key elements of the series - combat and conversation - tweaking both to take advantage of Apple's portable devices.

Galaxy's choices have less impact and are driven by a desire to avoid the dreadful fight mechanic instead of cleverly affecting the narrative.

Having invested so much of myself in the original game's character interactions, I was relieved to see conversation between my character and the AI still carried the same weight. Mass Effect framed dialogue incredibly, managing to communicate its characters emotions and the gravity of each situation through its excellent voice acting and cinematography. By virtue of that game's style and overall aesthetic, changes to this system have been necessary, but the general ethos remains. Animated comic book panels take the place of the run-of-the-mill cinematic cut scenes, and multiple dialogue options still play a major role in the game's development. Your character's responses are set on an options wheel, reminding me of an old dial phone with its numbers replaced by icons that help convey the tone of your response.

Similarly to Mass Effect, conversations enable you to either force combat or avoid it. Unfortunately, without the far-reaching implications that came with the first game's interactions, Galaxy's choices have less impact and are driven by a desire to avoid the dreadful fight mechanic instead of cleverly affecting the narrative.

Despite it being a seemingly simple 2D action affair, my old 3G device struggled.

Playing like the old wooden maze game Labyrinth, combat comes as a simple top down shooter that involves tilting the iPhone to move. It works well in theory, but it simply isn't fun. I often found myself desperately tilting the machine back and forth to try and accurately position my unresponsive character, while I remained locked on to an enemy who was sitting behind a wall as I took fire from his friend. Extra powers hint at more depth, but any tactical implications they may have had are rendered mute courtesy of the games poor reaction time.

My problems were magnified by the actual handset. Despite it being a seemingly simple 2D action affair, my old 3G device struggled. Often levels would begin before they'd fully loaded, and I would get cut apart as my character rolled out of cover only to find himself unable to utilise any of his abilities while the loading icon span impotently in the middle of the screen.

I have a suspicion that Mass Effect Galaxy was part of a larger plan. To release back-stories for each of the characters who accompany your player in Mass Effect 2 - small easily digestible titbits for obsessive players. Poor sales may have put the developers off such a plan, but its lack of success is well deserved. Its comic book inspired aesthetic ties in well with the action focused combat, but you just can't hide the fact that only half the experience is enjoyable - the other half feels more like a punishment. At GBP1.99 it's reasonably priced, but I can't help resent the loss of time spent slogging through it for fear I was missing some fantastic Mass Effect 2 bonus. Because I wasn't.

You can support Alex by buying Mass Effect Galaxy