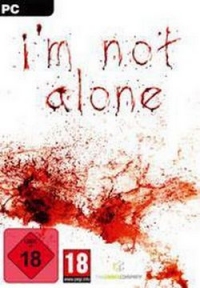 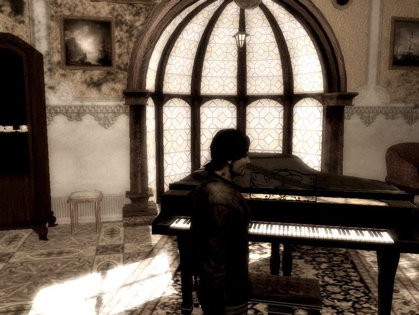 I'm Not Alone had me excited by its promise of a suspense driven horror gameset in my favourite setting - an old, creepy mansion. Unfortunately, it seems unable to deliver the game I anticipated. Poor visuals, appalling combat and obtuse puzzles prove the most obvious failings, but it is the lack of character and sub par writing (or translation) that were the real disappointment.

When I caught my first glimpse of I'm Not Alone, I admit I got over excited. A third person survival horror in a mansion infested with restless ghosts, it offered an experience reminiscent of the original Resident Evil. I bought it immediately.

From the first utterance of dialogue and jerky cut-scene it became painstakingly clear that something was wrong. A voice with a peculiar accent began to narrate, talking about past jobs using a mix of unnatural expressions. Checking the developer Pixel Revolutions' site, I saw that they were Italian. Suddenly I was struck with a vision of three people forced to translate the script in to English, housed in separate rooms with no means of communication before it was handed to a confused voice actor.

It transpired the unlucky actor that narrated the introduction was also fated to play the lead protagonist. I can only assume he was aiming for Han Solo with a level of care free bravado, but he came off like Russell Brand: obnoxious, brash and impossible to relate to. A lack of substantive back-story and a soul patch combined with his overconfident persona to create a character with no redeeming features whatsoever.

My lack of sympathy for the lead character reached the point where I actively wanted him die. In contrast, the games ‘evil' spirits inspired empathy, in spite of their terrifying appearance. Malevolent due their brutal deaths at the hand of their deranged killer, their anger seemed justified, making the violent methods my character invariably dispatched them with unnecessarily harsh and still further alienating me from him.

Despite its plentiful shortcomings I'm Not Alone's underlying story intrigues me.

It would be easy to dismiss the game out of hand, but despite its plentiful shortcomings I'm Not Alone's underlying story intrigues me. Focusing on a man's vicious sacrificing of innocents as part of a demonic ritual to resurrect his lost mother, there is at its heart a fascinating concept. But this tale is buried so deep under innumerable technical and artistic flaws that it is almost impossible to see.

To even reach the point where you receive a diary that begins to unravel the narrative it was necessary to navigate my way around the bland mansion, fighting uninspired enemies and trying to comprehend obtuse puzzles. It was a mundane task made no more enjoyable by doors that unlocked arbitrarily to allow progress, meaning every time I did anything I would once again have to scour the whole house, again, to see what doors were suddenly open. My reward for enduring this was page upon page of onscreen text, but at least its contents gave some hint as to why the game was given a green light for production.

While the document gave the game some meaning, it created just as many problems as it solved. Deciphering the basic meaning of the diary was easy enough, and added some tiny incentive to continue playing, but the puzzle solutions that were contained within its pages were near incomprehensible due to its broken English. A few could be solved by some slight extrapolation (such as replacing the word slot for hole) but others proved unfathomable due to the complexity of their instructions in conjunction with their poor phrasing. The resulting impasse had me at the point of surrender on several occasions before finding an online discussion board to guide me.

Every moment of narrative tension is squandered to another frustration.

It saddens me that a game with so much promise conceptually fails so totally in its execution. Every moment of narrative tension is squandered to another frustration. So flawed is every technical element that the small glimmer at its heart is barely perceptible beneath the infuriating controls and shoddy game engine. Yet, I could even forgive these technical nightmares if I'm Not Alone could just tell me its tale intelligibly, perhaps with a more amiable character at the helm, but it seems even this is too much to ask.

You can support Alex by buying I'm Not Alone