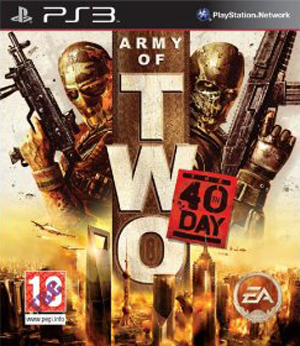 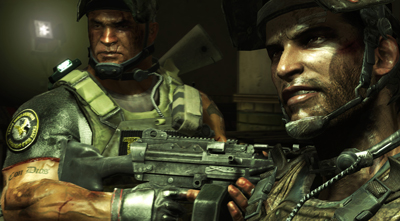 Army Of Two's co-op based FPS thrills are exhilarating, but not quite as much fun if you've got no one to play with. Although the story tries hard to connect my lack of real life comrade was the telling factor in the end.

As the name suggests, Army of Two: The 40th Day is designed purely for co-op. For their second shot at the Army of Two franchise EA have built on what made the original just about all right and refined it to make it pretty good. As a third person cover based shooter it goes up against some tough competition, but while the backdrop and story go some way to setting it apart, neither do enough to hide the one trick pony nature of its game play.

My time with Army of Two: The 40th Day has been dogged by a strange sense of dissatisfaction, despite the many improvements. Part of this may be due to the fact I have been unlucky enough to play most of the game in single player mode. Usually, this is an arrangement I am more than happy with, but Army of Two's appeal clearly lies in co-op. Relying on the computer to pull my limp body into cover and resuscitate it lacks the impact of watching a friend attempting the same manoeuvre, and arguments that ensue if they fail don't have the same ring of passion when you're arguing with a voiceless, soulless machine.

As the name suggests, Army of Two: The 40th Day is game designed purely for co-op.

My sole experience playing with a partner was limited to an hour with a guest. She spent most of the time either deliberately ruining my attempts to progress or unceremoniously dying, a situation I could have dealt with had it not been for the game frequently requiring two people to work in tandem. Yet for all of the complaints I have about my incompetent partner, it remained infinitely preferable to playing alone.

I was actually shocked that Army of Two: The 40th Day left me as unimpressed as it did, because there are many elements that should make it a successful single player game. My AI partner was well automated, with only rudimentary commands needed to suggest strategies. True, at times he was a tad unresponsive, but to make up for this he seemed to double as a bullet sponge in the face of oncoming onslaughts. I found my computer-controlled aide easily capable of bearing the full impact of any attack and still be able to resurrect my lifeless form after a failed flanking manoeuvre.

There is a greater emphasis on story than before. Set in Shanghai during a PMC attack, watching real world landmarks crumble on every side as I made my way through the street was terrifying, delivering a real urgency to proceedings. Despite the obviously scripted nature of these events, ensuring that I knew my character was never in danger during them (a passenger aircraft crashing almost directly in to me cemented this in my mind), it spurred me on through the levels thanks to the primitive survival instinct it evoked.

In conjunction with the overarching tale as my two warriors made their way through Shanghai were the moral dilemmas they also faced. Each of these decisions was relatively black and white, but the outcomes rarely played out as I anticipated. Like any real situation, the outcome of my decisions was unpredictable and frequently not in keeping with the spirit of the choice. For example, I spared a man's life simply because it seemed to be the right thing to do, but it soon backfired when it turned out he was dealing arms to the enemy PMCs.

It was hard to pin down exactly why Army of Two: The 40th Day felt so unsatisfying in single player.

It was hard to pin down exactly why Army of Two: The 40th Day felt so unsatisfying in single player. The story and moral asides provided more immediate gratification. But eventually it dawned on me that the reason I tired so quickly while playing was simply that the combat was too repetitive.

Playing with a friend allowed me to chat and joke, which helped break up the tedious combat areas filled with opponents who heedlessly ran at us. Alone, nothing diverted me from this monotony. Changes in location provided only mild distractions from the mundane firefights, because whether combat occurred on city streets, in a hospital or at a zoo, my opponents' tactics never altered.

It's a shame Army of Two: The 40th Day falls short. With side stories offering plots with bite-sized resolutions, a novel setting and an enjoyable shooting mechanic it should offer the perfect jump in and play shooter. But all of its achievements fail to raise Army of Two: The 40th Day much above average because at the end of the day (be that day the first or fortieth) all I did was hide behind the same cover while shooting the same opponents again and again.

You can support Alex by buying Army Of Two: The 40th Day