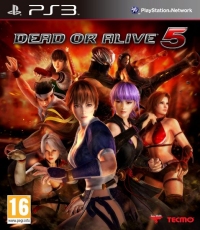 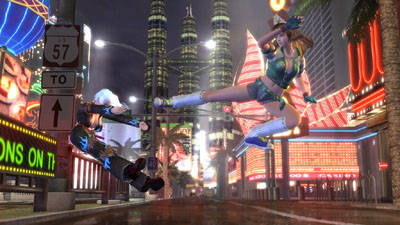 Dead or Alive 5 from Tecmo Koei continues to build on the fluid fighting of the previous instalments. But as much as the series' combat and sensibilities have evolved I have started to feel left behind; leaving me wondering if I have out grown it, or it has out grown me.

Dead or Alive 5 has me a little scared that I am old. It isn't the first time an old favourite has had me questioning if I can still keep up. Between the need to memorise long combos and the lightening fast reactions required to compete online, I fear that I am being behind. Dead or Alive 5 however, has me questioning not only my ability to compete, but also my sensibilities.

I have been playing the Dead or Alive games since they first hit arcades in 1996. Even in its first iteration it was accessible and balanced, first and foremost because of its battle system.

Based around a simple rock-scissors-paper mechanic, there's an elegance to the combat that it moved away from the combo-focused competition. Running on hardware of the day, this made for a flowing and reactive play style, waiting for a small window of opportunity to counter whatever the opponent threw at you. A strike could be beaten with a counter, this could be outwitted with a throw which could in turn be bested with a strike -- all nice and simple.

This system has endured throughout the series, but with Dead or Alive 5 the increased speed of play has given a different feel. Though retaining its fluid motion its once deliberate pace has been abandoned leaving me struggling to keep up. In Dead or Alive 3 (the last in the series I spent significant time with) I was able to read an opponent's moves, in 5 I almost have to pre-empt them. Whether this is my aging synapses or the game I struggle to say, but what used to feel within my abilities now pushes me to the limited, demanding split second responses to single frames of animation.

It isn't just my reactions that make me feel like Dead or Alive has left me behind, it's the breast physics. It has been a feature since the first game, and while it was always puerile when I was sixteen it just felt like a bit of fun. But somewhere between then and now something has changed, and it isn't just the graphical fidelity. No, to me, this new incarnation feels quite sinister.

There is certainly a case for the fact that it is my age, with the cast of characters (who have never aged) looking increasingly young to me. This is especially problematic in the beautiful new game engine, as the increasingly more realistic school aged girls as objectified in front of me with little characterisation.

This isn't about their overly generous proportions either; lingering cleavage shots are commonplace throughout media. As a man who grew up in the Baywatch era it is hard to start holding a Pegi 16 rated game to a higher standard than a Saturday afternoon TV show. However moments in Dead or Alive 5 cross from jovial into creepy. It is during a few lingering up-skirt shots of school girls, and the ability to position the camera wherever after losing a match, that I feel its has gone that little too far.

It is voyeuristic, and in the middle of a fantastic fighting game, it makes me uncomfortable.

Having a love of Japanese media I am more than familiar with the phenomenon of sexualised schoolgirls with cheeky camera positioning, but in these few moments Dead or Alive 5 misses its mark. This isn't part of the comic relief; there is no joke or story pay off in these scenes. Odd as it sounds, the game's use of sexual imagery lacks context. It is voyeuristic, and in the middle of a fantastic fighting game, it makes me uncomfortable. Or perhaps I am becoming prudish in my old age.

In Dead or Alive 5's defence, my issues only occur a few times throughout the story mode, which has made up a fraction of my time with the game. The rest of my experience was filled with some of the best looking, fluid and accessible fighting of recent times. With so many fighters growing in complexity, Dead or Alive 5's continued reliance on speed and timing continues to make it feel fresh and accessible, if you are young and fast enough.

You can support Alex by buying Dead or Alive 5