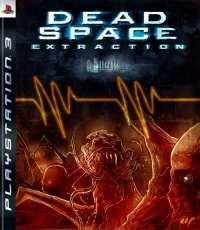 Other GamePeople columnists have reviewed this from their perspective - huh?:
Frugal Gamer (Wii)
Tech Gamer (Wii) 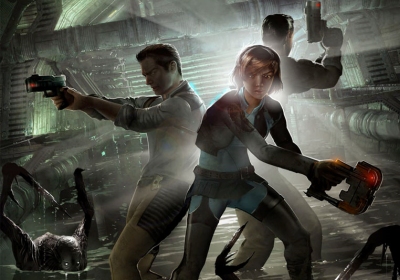 Dead Space Extraction is an interesting guided experience, and manages to firmly hold your hand without compromising the scares. With developer Visceral Games at the helm this prequel to the events of Dead Space is a wonderful companion piece for fans.

Moving down the hall I hope for a chance to stop. I have to proceed before I know though, standing still will only result in death from the ever-growing number of alien forms behind me on the dilapidated mining colony on which I'm trapped. I want to stop, take my time, plan a route and move forward more cautiously, but this just isn't always possible.

It all feels like being trapped in a seventies B-movie. All I can think is "don't go in there." If I were really trapped like on a space station like this I would be hiding under my bed, but that's not an option available to me because Dead Space Extraction is a guided experience. Where it goes must follow, even if it is through a tiny dark air vent undoubtedly filled with pincered creatures hell-bent on my evisceration.

I remember thinking, when I heard about Dead Space Extraction, that an on-rails shooter would diminish the fear of the main games. Basically, this is a light gun roller coaster game, the dips and turns are all set out, but with each turn there is an event that requires all targets are dispatched to continue.

It feels like a world in turmoil, but more affectingly, a world that was recently home to many.

As with horror films, giving the director control of the camera enables Extraction to manipulate and curate your experience. Being sent down a corridor, or catching a glimpse of my hunter before something else drags my own focus away is a chilling feeling. By taking my agency away Visceral Games craft a far scarier game.

Grasping the Move controller as we've become accustomed with the Wii-mote, we're plunged into the heart of the story. Extraction imparts the vital information organically without ever feeling taught. Indeed, some plot points are left unexplained, perhaps with other media picking up the slack, but never to the detriment of the unfolding narrative or the drama it establishes.

Slowly you discover how badly the mining colony has suffered from the hypnotic affects of an alien artefact (the Marker). Placed in the guise of a security guard I learn of the violence and deaths that have occurring, and joined by an old friend from the mining ship Ishimura (the craft from Dead Space) I head off to the morgue to show him what has been happening. Upon arriving it takes moments to realise all is not well as the bodies were gone, or more accurately it transpired all awake and angry.

It is clear the whole colony is in a similar state, with seemingly reanimated corpses everywhere attacking the living. Huge living areas are in chaos as inhabitants fight to make their way to safety through the crazed attackers. It feels like a world in turmoil, but more affectingly, a world that was recently home to many.

The quiet periods in-between do more than offer a nod to the classic sci-fi fright movies.

From here things escalate with moments of exposition and tension punctuated by long sections of shooting. If Dead Space Extraction were a movie it would be an action movie not a horror. The mechanics are ill-suited to the pacing of a traditional horror experience, but while more active sections are frantic and overwrought the quiet periods in-between do more than offer a nod to the classic sci-fi fright movies.

Even at its most predictable Extraction never fails to service scares though. One section that required some very rapid spot welding saw me restart five times but the fear and tension did not subside as time after time I was dragged to my death, unable to seal my team safely behind the door (all proving pleasingly reminiscent of some scenes from Aliens).

I would posit that such scenes may actually do a better job of holding up to replays than even a title like Dead Space 2. The main games allow scares to be mitigated through altered tactics whereas Extraction dictates (forces) you to deal with each situation on its pre-defined terms.

The quiet periods in-between do more than offer a nod to the classic sci-fi fright movies.

Giving the designers so much authorial control may diminish some of the game-ness, but it does the fears and frights no disservice. While at times it maybe be tiresome to have the camera yanked away from obvious dangers only to swing back just before an attack, Extraction gets away with it convincingly.

For those not familiar with the Deadspace comics, books and previous games, Extraction stands as wonderful introduction to the fiction. At fifteen pounds (or free with some releases of Dead Space 2 on PS3) it is also a must for fans of the series.

You can support Alex by buying Dead Space Extraction