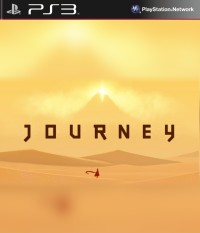 Other GamePeople columnists have reviewed this from their perspective - huh?:
Reporting Gamer (PS3)
Novel Gamer (PS3) 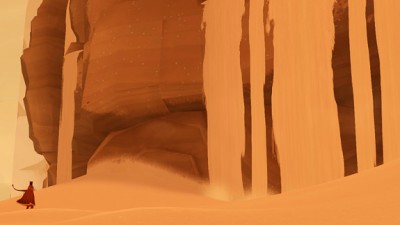 Emotional and poignant, Journey continues That Game Company's tradition of creating titles that are as much about life and poetry as they are about play.

Moving beyond its own world and into my life, it reminds of solitude. It is this that motivated me, before finally elevating me from such fears.

I wasn't sure what to expect beginning Journey. Sandbanks rose on all sides obscuring the world's features. I simply started walking. Cresting the dune the desert and beyond suddenly sprawled before me. Stretching far into the distance a mountain stood with a single column of light ascending endlessly upwards from its peak up. With no knowledge of my motivation, I at least now know my goal.

No explicit guidance was given as I made my way forward; it was left to the world to pull me on. Immediately before me was a sea of rock markers set in the sand. These silent grave-statues reminded me of my mortality. Their unmoving time-beaten forms surrounding me, driving me on by a shear force of presence. I tried to escape their clutches taking the fastest route away but a harsh wind funnelled my back through the corridor of stone.

I walked on quietly cheeping to myself - a simple tap of the button and my tiny avatar would let out a tiny, soulful, tweet. Holding down the button would allow a louder cry that in my solitude hollow.

It empowered, but also limited me by its own finite constraints.

My only other power was a gentle leap that sent me gliding effortlessly in to the air. This was acquired when I found a shining aura with pieces of cloth dancing within it. As I approached they swirled around me, settling like a scarf on my shoulders. It was patterned with a brilliant white glow that slowly dissipated as I moved through the air and had to be replenished before I was able to jump again. It empowered, but also limited me by its own finite constraints.

It didn't take long before I found myself lost. Searching for a way to move forward towards the mountain. My goal became obscured from and view I was disorientated. This and the building fear of isolation struck a chord of panic in me. It was at that moment, as my awe at the world was becoming muted, that someone else arrived in my game and the real Journey began.

While being online is no guarantee that another player will appear, or that if they do they will be of any help, this lose connection intrigued me. Journey draws in online partners at random. There is no way to communicate beyond the tweets and your movement. But somehow these are filled with new meaning and expression, and offer a crude understanding between two players.

Without my partner, to finish would be empty.

I quickly became attached to my partner, despite the limits of our communication. In the vast areas I would often lose them, and let out my unchanging cry. Bleating to find my ally. Without their companionship, the lack of direction and the solitude once again closed in. As in life, without my friends, I felt weaker and less capable of facing challenges.

Sliding down a long hill my partner and I jostle for position between rock arches that litter our path. I become stuck on a pillar and my partner disappears down the slope. Reaching the bottom of the slope, in a completely new environment my separation anxiety is pronounced. I run in circles, spinning the camera hoping that I would once again find my friend.

I wasn't even sure I wanted to go on alone; I felt that somehow, without my partner, to finish would be empty. Then from the darkness I heard a small cry, my screen illuminated slightly in one corner indicating the direction of the call. Wasting what energy I have left I leap towards the sound and am joyously reunited.

A friendship formed without a single world spoken.

My relief at their presence is magnified as I approached the end of the game. The environment becomes hostile as I close in on the mountain peak and, alone, the oppressive solitude may have been enough to stop me. Together, however, I felt able to press on through the trials to Journey's elating crescendo.

There are few experiences in gaming that can take me through the emotional ride that Journey does. Travelling its empty barren world, in all of its beauty, both awed and chilled me.

Alone I could traverse the world, but it would be a hollow empty experience. With a friend it was transformed into something joyous, even at its most trying, as we overcame it together. A friendship formed without a single world spoken.

You can support Alex by buying Journey