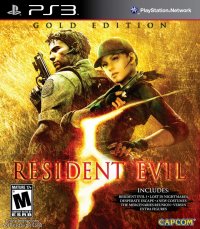 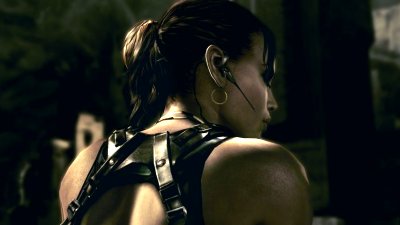 Resident Evil 5 Gold Edition shows how well Capcom understand the history of the series. Here, they re-cut the zombie 'em up with new missions that change both pacing and play style. This special edition includes Lost in Nightmares and Desperate Escape DLC as well as Versus, The Mercenaries Reunion and Costume Packs 1 and 2.

The main event here are the two mission packs, available as downloadable content or as part of a Gold Edition on 360 and PS3. The two short stages see you filling in plot points that were skipped over in the original game. These two very different missions generated equally unnerving but very different personal responses.

Playing Resident Evil 5 was a mixed experience for me. Having waited expectantly for the game since its announcement, there was no way it could have lived up to the hype. A reliance on action and co-operative play diminished the vulnerability I enjoyed so much from the series, and required I use more ammo in the opening act than in the of entirety of the first game. I still enjoyed it a lot - but I couldn't help but long for the original game's haunted mansion vibe.

Enter the first set of DLC - Lost in Nightmares. It felt as though Capcom were reading my mind as the mission begins outside a mansion at the dead of night. Filling in details of a flash back sequence from Resident Evil 5 this short act cast the first game's two lead characters, Jill and Chris, together again. Exploring the creepy mansion with the original's antagonist felt like a high-definition remake of the first Resident Evil I so longed for.

Memories of the fear generated by the original welled inside me as I moved in to the mansion's silent hall. Blood smeared across the floor made it clear all was not well. Behind the stairwell I discovered a lever that releases gates at the top of the stairs. I move towards the gates and a body drops from the landing above. Swallowing my heart back down, I holster Chris's gun, the body is surprisingly just that, a lifeless corpse. The zombie I had become conditioned to expect failed to materialise.

As the hour-long experience drew to its preordained climax I found myself desperate for more of the on edge tension that I had missed so much during the main Resident Evil 5 experience.

I returned to my search through the old, smaller than anticipated, house and cellar; finding myself constantly impressed at Resident Evil 5's newfound restraint. Teasing scares, playing off of my expectations, this short level was an incredibly tightly crafted piece of fan service.

It lavished weapons on me and built an anticipation that I was about to face a maddening rush of infected that never came. Placing an emphasis on atmosphere the game play centred not on combat but problem solving and exploration. As the hour-long experience drew to its preordained climax I found myself desperate for more of the on edge tension that I had missed so much during the main Resident Evil 5 experience.

Desperate Escape is the second new chapter, and it focuses on Jill and Josh's escape from a research facility. Running parallel to final events of the main story, Desperate Escape is an experience far more in keeping with Resident Evil 5's frantic run and gun game play. In fact it revels in it even more.

From the onset of the mission I was placed under constant assault as infected rushed towards me. After opening the level's first door I was not afforded a single moment, with barely enough time to heal or arrange my inventory until the single break in play only. This seemed to be more of a concession to the need for loading the second half of the level than a design requirement. I was soon back to the carnage.

Throughout this frantic exchange I found myself blindly juggling weapons and items to try and gain an upper hand against the horde, running low on ammo and health with a frequency rarely encountered in the rest of the game.

It captured a real sense of survival horror - scarcity of resources was a tenant of the genre since its inception.

Creating an unrelenting sense of urgency and panic it was not the experience I hoped for, but it did capture a real sense of survival horror - scarcity of resources was a tenant of the genre since its inception. Managing a limited number of items and eking them out to best effect, knowing the whole time that an error could leave you defenseless is incredibly powerful catalyst for panic, which this content utilised well.

Both these additions to Resident Evil 5 do little to expand the story. They sit alone in the options menu, with no attempt to integrate them. But the different perspectives they provide on survival horror game play are enlightening, each focusing on a different aspect and exploiting it to full affect.

Personally I prefer the horror heavy Lost in Nightmares, its focus on it environment and a creeping dread far more inline with my interests. More action orientated players will certainly appreciate the panic inducing Desperate Escape level.

I am relieved to see Capcom remember the real strengths of the horror genre. Crying back to the underlying foundations of the franchise, these two DLC or Gold Edition missions move away from the action movie vibe of Resident Evil 5. Both use different tactics to achieve their respective aims of horror and panic. Both offer a glimmer of hope that future instalments will return to these more traditional ways to create atmospheric and survival focus that drew me to the series over ten years ago.

You can support Alex by buying Resident Evil 5 Gold Edition