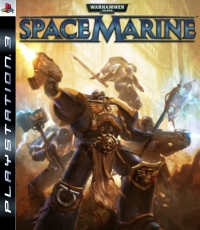 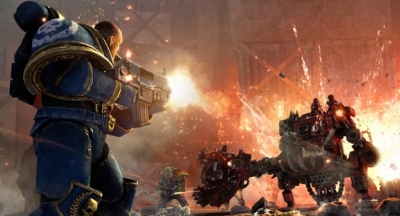 Warhammer 40,000: Space Marine casts you as a human tank armed to the teeth and able to destroy all in your path. It's empowering stuff, but the surrounding world that tells a more disturbing and bleak story about the rest of humanity.

The Universe of Warhammer 40,000: Space Marine is a dark and desolate one, ravaged by war. Horrors all around fill me with hopelessness despite the empowerment of being a Space Marine. Human suffering and death is chronicled throughout the devastated buildings and I find it impossible to ignore however much callous dispassion my in game persona, Capt. Titus, regards it with.

For those unfamiliar with Warhammer 40,000's rich fiction, Space Marine may seem like a generic title. It is an odd contradiction, as while I am fully aware of how the term sits in the popular lexicon, for me the name represents an iconic part of my youth. These are the Space Marines, elite troops of the Emperor's legions; huge walking suits of death, fanatical in their devotion.

Marines and the Empire represent mankind in this horrific imagining of the future. Orks, Tyranids and Chaos beset us from all sides. It is a situation that probably explains the disturbingly pragmatic view towards life that Capt. Titus displays. With the shadow of death constantly present, there is no time for sentiment.

Every human character I meet in Space Marine is fighting for their lives, or dead, and even the regular military are regarded as expendable. Fighting to defend a factory planet for the machines of war it houses, I am disgusted to see no help offered to on the surface, whose deaths are treated as an inconvenience.

Horrors all around fill me with hopelessness despite the empowerment of being a Space Marine.

Encased in armour it is clear Capt. Titus and the other Space Marines are more than human. Those they meet worship these genetically enhanced warriors. Treated like lords, their noble status can be heard through their aristocratic British voices that stand out against other's common tongue. Adept fighters with superior equipment, similarities to the samurai or knights are clear, but even these analogies do little to demonstrate their power. Master of both ranged and melee combat they are capable of decimating literally thousands of enemies.

Titus, bares two studs in his forehead that denote more than two hundred years service, and as he tears his way through the hordes it is clear to see how he survived. From the moment the game begins he stands alone against an entire ship of Orks armed with only a knife and a pistol, yet he deals with them with ease.

Quickly new guns and martial weapons become available, still further strengthening Titus and his two Space Marine brothers. As dozens of green, brutish bodies rush towards me I thin their numbers with grenades while picking off ranged threats with a combat rifle. As they close on me I switch to the games equivalent of a flamethrower and reduce another six to ash. The flood of green continues to emerge from tunnels, I draw the Power-Axe and Titus begins to get dirty.

Audio recordings tell the fear of those trying to escape.

From inside the horde combat changes. At range Titus's armour seems more than enough defence from the Ork's projectiles, but axes open his protective suit faster than a can of tuna. Even utilising the Marine's surprising agility, shield and health rapidly drop in the foray. Unable to rely on sheer resilience I stun a nearby Ork and perform an execution, replenishing half of the health bar. It is a stopgap measure but as I move to the next pack of enemies I release Titus's Fury. Making him near invincible Titus unleashes all of his anger becoming a whirl of blade and bullets, emerging victorious and soaked in blood.

For all of the danger and thrills of combat, it is the world Titus moves through that resonates emotionally. Huge oppressive factories look like forced labour camps, but the workers that once inhabited the tiny, multi-bunked rooms are gone. Audio recordings tell the fear of those trying to escape, husbands comforting wives and triage doctors leaving patients to die. These artifacts of a world lost tell of a wrenched existence, thousands exploited under the yolk of the Emperor, commanded by automated systems that perceive them as no more than cogs in a machine.

As Captain Titus, Warhammer 40,000: Space Marine offers me a world of thrilling ranged and close quarters combat. But as Titus experiences this excitement, my eyes turn to how others in the universe live. Their unquestioning adoration of the Empire leaves a bitter taste in my mouth. While all praise and exult Titus as their warrior saviour, I can't shake the idea that the Marine's are part of the regime that traps them in sickening servitude.

You can support Alex by buying Warhammer 40000 Space Marine