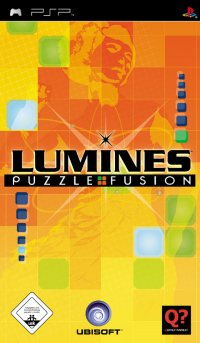 Lumines PSP is a simple block puzzle game. By fusing music with the game play developer Q Entertainment were able to make rhythm a key element. Tiny tweaks and alterations, made by the incorporation of music, constantly changes the pace and tactics, while the aesthetic keeps the experience appealing for both newcomers and seasoned players.

Some games have the ability to encroach on daily life. Often the affect of this invasion is to imagine myself behaving as I do in a game to make a daily task more entertaining. In a few rare cases however this seeping of my hobby in to my real life are more disturbing becoming almost comparable to an addiction as I become unable to focus on events at hand.

There are only a handful of games that have held this addictive power over me, and all of them were puzzle games. Perhaps it is their basic mechanics mixed with the capacity for near limitless depth, or that a part of my brain is particularly susceptible them, but games like Tetris and Puzzle Bobble have stolen months of my life, while both playing and thinking about them.

Most recent of my addictions has been Lumines on the PSP. Starting the game there seemed to be very little to it. A square formed by four smaller squares would descend down the screen. These blocks would be made up of two colours, and I had the simple task of forming square and rectangular patterns of a single colour within the playing field.

Violence, sex and gore all passed me by with no negative side effects.

When I finally decided it was time to put away Lumines, to try and forget all about it, that's when it crossed the line from fun distraction to addiction. I was able to cope with its distraction to mundane tasks; even at work visions of the orange and silver blocks offered me little cause for concern. However the day in question did not involve such trivial tasks, it was an encounter by an ex-girlfriend.

I'll spare you the messy details of my private life, but as I stood with my ex hitting my chest, her friends off to one side and my new girlfriend stood judgmentally to the other, something truly disturbing happened; blocks stated to fall, I swear that I could actually see them. That is not healthy. No matter how tired or drunk I was.

Lumines, in all of its iterations is an engrossing game.

My own inability to focus on the emotionally charged exchange, with a girl I truly did care about, terrified me. Never before had I felt any detrimental influence from a game. Violence, sex and gore all passed me by with no negative side effects. Not once did I feel desensitised to a real event through my exposure to the wealth of digital horrors available to gamers today. But the pretty colours and simple puzzles of Lumines muted my emotions and distracted me from a very real, and important, event in my life.

Lumines, in all of its iterations is an engrossing game. It sucked me in completely, hooking me until I made a concerted effort to put it away. It is sad that I now unable to go back to with associating it with the events of that day, but that doesn't stop me wholeheartedly recommending it.

You can support Alex by buying Lumines