Prinny: Can I Really Be the Hero? PSP Review

Prinny: Can I Really Be the Hero? PSP 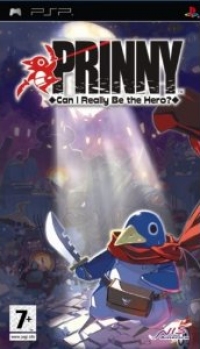 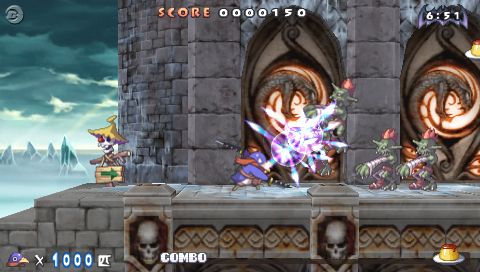 Prinny: Can I Really Be the Hero PSP is an old school platformer with some new ideas. 1000 lives and a difficulty that tries to steal them off you each and every level. It's a scary experience for those not used to losing lives every second of play.

Prinny: Can I Really Be The Hero? utilises a mechanic as old as video games to instil an ever mounting panic in me. It may be outdated in the modern world, a relic of a time when arcades were king and developers aimed to display the "Continue?" message as quickly as possible, but the concept of "loosing lives" finds fresh expression here.

Lives are an anachronism from the dawn of gaming, which are so ingrained that most don't question their inclusion in a modern title. And with most games now played at home there is no need to tempt players to pump in another coin. Lives and continues have been rendered obsolete by the invention of respawns, checkpoints, energy and saves - devices implemented to alleviate audience frustration and entice them to finish.

Prinny: Can I really be the hero? takes this outdated concept and turns it on its head by offering one thousand lives at the start of the game.

It is a strange contradiction of a videogame. A little penguin tasked with collecting desserts in a two-dimensional cartoon world suggested a light-hearted children's game to me, but how wrong I was. Prinny revealed itself to be one of the most difficult games I have played in some time and showed me that either this was a game for seasoned veterans, or that I've lost touch with how good children are at video games.

It became a soul crushing experience just to make it from one checkpoint to the next as predictable attacks whittled away at my life counter.

By the end of the fifth level I had already lost more than 100 lives, thanks in part to the game's steep difficulty, but primarily my own impatience to progress. I would jump too carelessly, my modern gaming brain forgetting the lessons of youth. The pain of Super Mario Bros: The Lost Levels purged by years of games that held my hand and mollycoddled me. No, Prinny is not about speed and fluid movement, but timing and patience - something I was forced to remember.

Watching my lives tick away scared me. Despite an ample number of lives at the start, it began to dawn on me that I might not make it. Even with checkpoints and saves inserted throughout levels, I found my progress laboured. It became a soul crushing experience just to make it from one checkpoint to the next as predictable attacks whittled away at my life counter.

Usually when playing portable games I allow myself to be distracted. Playing my PSP I'm usually listening to my MP3 player, or half watching the TV, but Prinny put a stop to this. After losing lives by the bucket load, I came to the conclusion that dividing my attention was not an option if I hoped to succeed.

Each jump causes me to hold my breath and every enemy strike has me flinching with anger.

Now every time I sit down to play Prinny there is a tension that runs through me. Each jump causes me to hold my breath and every enemy strike has me flinching with anger. My sole purpose becomes making it to the next checkpoint, each tiny stepping-stone on this journey is met with joy, and each failure with a seething anger.

While it embraces many outdated gaming philosophies, Prinny: Can I Really Be the Hero? feels current thanks to the awareness of its designers at Nippon Ichi Software. It rejuvenates the punishing games that dogged my youth, and reminds me in many ways of why I am happy they are gone - the unforgiving platforming robbing any real sense of fun from the experience.

But something about the constant countdown of death towards a total fail state adds creeping tension to every move - there is something about Prinny that makes every little victory feel incredibly satisfying, and that keeps me coming back.

You can support Alex by buying Prinny: Can I Really Be the Hero?