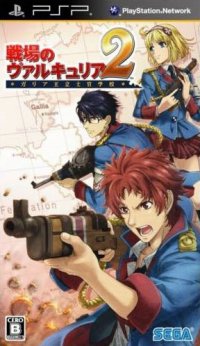 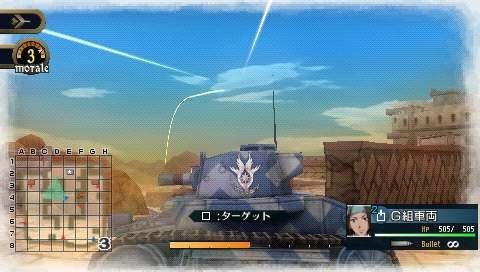 Valkyria Chronicles 2 expertly fits the PS3 game into the diminutive PSP. In doing so it shouts from the rooftops how good the under-appreciated original turn-based action strategy really was. The unsettling tension and unnerving decisions that arise from the nuanced play style continue to haunt me on the PlayStation Portable.

I'm playing the Japanese version of the Valkyria Chronicles 2 for PlayStation Portable. So, although I can navigate menus with my limited knowledge of the language, the plot is a little lost on me - I simply click through pages of text and static anime images that have replaced the animated scenes of the original version. Maybe I'm missing a big part of the experience, but a part of me is relived to be free of the lengthy exposition.

When companies port franchises to new platforms it is always gratifying to see consideration put in to the changes the move will bring. Making the leap from the PS3 to the PSP there are plenty of technical limitations that mean Valkyria Chronicles has had to be re-imagined to fit. Most notable is the setting that moves the focus from established militia to cadets in a military training. This enables Sega to concentrate on shorter, more focused missions that are lighter on the processing power of the PSP.

This shift to 'school' days may at first seemed like pandering to the typical young male Japanese audience. Girls dressed in short skirted military uniforms with impossibly large weapons seems more like an otaku's fantasy than an efficient way to train soldiers. But the sense here soon becomes apparent - still in training, members of my squad were significantly more versatile than those of the original game, allowing them to specialise in disciplines once they became sufficiently experienced. This adds a real RPG element to the experience.

These 'specialisations' move along branching development paths that seem to offer either more defensive or aggressive roles. Resulting in more unit types than the original game this significantly raises the available strategies in any situation.

As in the original, Valkyria Chronicles 2 takes place in two distinct stages, turn based placing characters on the field followed by real time moving and attacking. Despite a few new menu options and changes to the controls to accommodate the lack of a second analogue stick it all feels very familiar.

But this familiarity is constantly disrupted by small alterations and additions. For instance, in the original all the action took place over a single map, but here missions seem to be on a number of smaller maps - I assume for technical reasons. "Often areas are unavailable to me at the beginning of a round, by capturing deployment points these new maps are unlocked and frequently contain the objective. A tiny change, yet it forces a change in my tactical thinking as I split my team between multiple maps.

With many old tactics rendered obsolete, I devise new plans. Before I would place my entire allowance of troops at the start of the round and move them in small units, now I place only one or two of my team on new maps to leave an anti-personnel unit to defend my base and hustle the others towards the enemy flag. Once captured I am able deploy my remaining squad on the flags corresponding partner on the following map that houses my real objective.

Sega did a superb job of scaling the PS3's presentation and mechanics for Valkyria Chronicles 2 PSP.

As Valkyria Chronicles 2 PSP unfolds over the course of a year strategies are also forced to adapt as the seasonal factors come into effect. Night, snow, sandstorms alter the environment and squad moral. I found that they provide a welcome change on some of the more over-used training grounds.

Being set in a military academy much of the combat is on the training field training. As in any teen-drama hormone fired emotions run high and there is clearly antagonism between your own squad and others. Occasionally these emotions spill over into the game play, providing extra missions and even altering characters behaviours.

Given the challenge faced, Sega did a superb job of scaling the PS3's presentation and mechanics for Valkyria Chronicles 2 PSP. Concessions in terms of presentation and battlefield size are easily made up for by the eye catching comic book style, and the multitude of tactics derived from the map system and squad classes. Managing to capture the first game's appeal and translate it to the tiny handheld was a feat that I honestly didn't think would be possible. But I am more than happy to be proved wrong here. In fact I'm beginning to prefer the more digestible format of this latest instalment.

You can support Alex by buying Valkyria Chronicles 2