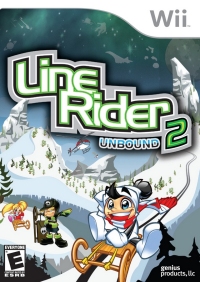 Hurling a little guy on a sledge down a hill makes Line Rider 2 sound instantly appealing. Originally a PC title, the sandbox physics fun the game is a good fit for the Wii. Unfortunately, overly complicated menu navigation and tricky controls made accessing the promises of my imagination more of a challenge than I had bargained for.

I was never much good at physics. Of all the sciences it was the one that appealed to me the most, explaining all of mysteries of the world that I was fascinated by in my youth. But somewhere in the mix of equations and numbers it stopped being a magical answer to my questions and became work. Games such as Line Rider 2 are present me an opportunity to rekindle the joy I once felt for the subject through simple play.

Problematically Line Rider 2's basis in real world physics is surprisingly concrete. While there is something intuitive about acceleration down a hill and deceleration up it, the reality is more complex. Creating solutions in my head to the problems, or designing my own tracks is an easy affair, but the reality never matches my imagination.

Despite some streamlining of the system, the Wii controller struggled to match the ease of the PC's controls.

Issues are not limited to my own ineptitude with the physical laws of the game. Problems also arise from the complexity of interacting with the systems interface. Initially all that the games required was that I draw lines connecting sections of track for my tiny avatar to slide along on his path to the goal. It was when new surface types were introduced that things started to get more frustrating. Selecting new menu options was fiddly as I navigated using the Wii controllers. The trail and error required to solve tasks proved increasingly laborious as I switched back and fourth between the available options.

The interface was the route of my annoyance and my eventual defeat. Selecting the line type I wanted from the menus was considerably more complex than the games childish aesthetic implied it would be at the outset. Realising that the game was a port of a PC title I tried the demo of the original game and the issues became clearer. Accuracy and navigation around a similar interface with a mouse was faster, intuitive and ultimate enjoyable. Despite some streamlining of the system, the Wii controller struggled to match the ease of the PC's controls, and quickly lead to annoyance.

It is sad to admit that the game is too complicated for me to be bothered with. I can see it appealing to some, but any of Line Rider's incarnations on other platforms are more enjoyable thanks to their superior interfaces.

You can support Alex by buying Line Rider 2