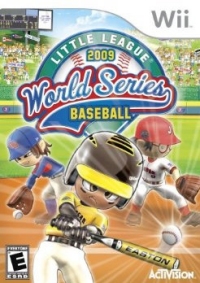 Other GamePeople columnists have reviewed this from their perspective - huh?:
Sports Gamer (Wii)

Little League takes Wii-Sports Baseball to the next level without overcomplicating the action. Hoping to take a breather from scary games this week, I had forgotten my sporting misapprehensions. Little League World Series Baseball on the Wii helped me put them to bed once and for all though.

To this day when I step on a sports field I get a knot at the pit of my stomach. Prospectively missing a simple catch causes me anxiety. I don't know if it is my own uncertainty in the sport, letting down my teammates or my competitive nature that causes my angst, but I do know sports video games allow me take part in a sport without this unease.

Little League World Series Baseball 2009 is a Wii game I wouldn't instantly rush out and buy. Its title alone gave me the impression that it was going to be a roster of unfamiliar American teams. When I reached the team select screen it was therefore a nice surprise when I saw the Japanese flag among the options.

Still more shocking was the fact this then took me to a sub menu where I could pick my local team the Hanshin Tigers. Instantly more fun to be controlling a familiar team. I dived into the game to be met by the Yakult Swallows - coincidentally this match up was the first game I ever saw at the Tiger's stadium - and was starting to get a little excited rather than apprehensive.

I stepped up to the plate. Previously my only experience with video game baseball was in Wii Sports, so I was pleasantly surprised that timing and swing mechanics carried over but required some additional finesse. Three balls were pitched at me and I swag at air three times. My next batter stepped up and on the third pitch connected with the ball. It soared vertically in to the air and he was easily caught out. The same pattern followed for my third batter. I was pitching.

Enough strategy to make it more that another pointless waggle game.

Pitching proved surprisingly satisfying. Twisting the Wii controller and pressing the A and B buttons allowed me change the pitch I threw, while timing controlled power. I threw. It arched in to the air floating over the batters swing. My next attempt wasn't so successful and the batter connected.

A prompt appeared and I was forced to shake the Wii-mote to make my fielders make the catch. Too slow to realise the need for waggle, the ball bounced free. Another prompt, this time which base to throw the ball to. I looked at the radar that displayed the central diamond; the runner was coming up on first. Jerking my remote to the right selected first base and my fielder threw the ball. The batter was out. Up stepped their second batter; I could see him preparing for a bunt, so I changed my fielders' tactics.

To spare you the blow by blow I lost that first game 7-8, but enjoyed every second of it.

Everything in Little League World Series Baseball on the Wii is accessible, with everything happening at a good enough pace and with just enough strategy to make it more that another pointless waggle game. I felt capable every step of the way, feeling none of the anxiety or uncertainty I feel on a real pitch.

If Wii-Sport baseball kept you coming back and you are looking for something more substantial then this is defiantly worth a look.

My dispelled nerves may simply be down to the fact I was quietly playing in my own apartment, but I like to think part of it at least was because I felt so capable in my role. Teams are incredibly responsive performing their roles flawlessly, leaving me to make tactical decisions and not worry about small errors my nerves would cause if it were real life.

I will be honest, I was surprised at how enjoyable (if casual) an experience Little League offered. Games are short and perfect for quick bursts, which thanks to the simple controls can be enjoyed by almost anyone. If Wii-Sport baseball kept you coming back and you are looking for something more substantial then this is defiantly worth a look.