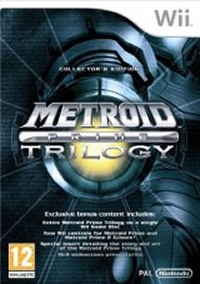 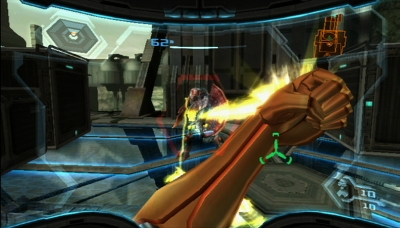 Metroid Prime Trilogy's genuine sense of place not only sucked me into its universe but unnerved me to the core. Helmeted claustrophobic scary excitement and all on the diminutive unassuming little Nintendo Wii.

Nintendo handing off one of their prized franchises to an outside development house came as something as a shock when Retro Studios were given the Metroid series. But the Gamecube's Metroid Prime games were something of a renaissance of the genre - taking the original game's two-dimensional exploration platforming game play and recapturing it in 3D.

Metroid Prime Trilogy offers the original Gamecube games, Metroid Prime 1 and 2, and the 2007 Wii sequel Metroid Prime: Corruption in a single box set. The perfect excuse to revisit my love affair with the series.

It is hard to express the full range of emotions during a Metroid Prime play through. Stepping into the game leaves me feeling strangely cold at first. Not in an unimpressed way, but from the oppressive loneliness. Everything is designed to draw you in and force you to share the solitude of being stranded on an alien hostile world.

Stepping from my ship it's immediately apparent the display framing my screen is not some magical overlays, but part of a helmet's interior. Their subtle arc barely noticeable as the visor curves around my face, but subconsciously placing me in the world - my ever present reminder of frailty and dependence on the suit in the hostile world.

Then as a shadow falls across my face I'm startled by a pair of eyes staring back at me.

Then as a shadow falls across my face I'm startled by a pair of eyes staring back at me. My own eyes seen in reflection join condensed steam and raindrops to convince me this thin layer of glass is all that stands between my frame and oblivion.

This hostility combines with the ravaged flora and fauna. Crashed ships and grizzled, twisted bodies are found. Unpleasant demises, not limited to friendly forces. These once foes lie destroyed by an adversary still more powerful than themselves, hinting at even greater dangers to come.

From the loneliness a new emotion emerges as I discovered more of the world. Every new power I obtain brings with it not only the promise of a new ability, but also the opportunity to reach new areas. A new energy weapon here, and new visor there, all stacking to grant the chance to progress a little further into areas already visited. Slowly my confidence grows.

Rather than simply thrusting me through a linear story, never looking back, the Metroid Prime games forced me to revisit areas with my new skills. Slowly I became familiar with the world; and even the most hostile environments become comforting. The tundra takes on its own personality - friendly, treacherous and uncharted - as much a character in its own right.

My captivation allowed the game to lead me and manipulate me.

Investigating with my new found familiarity lessens the effects of solitude, but the tension of what could lie ahead still caused trepidation in my advance. My caution found its route not in the mundane enemies that I encountered dozens of time before, but in the boss fights that I knew each new open area could hide.

even though Metroid's towering bosses are well signposted, my gnawing anxiety still surfaced each and every time. The unknown nature of their skills as they filled my visor was more than enough to deter my heroic efforts. Whereas elsewhere I'd live with a few deaths as I learned the circle strafing or jump shots required to dispatch my prey, here each of these fights, however futile, represented a struggle for my own survival.

Metroid Prime Trilogy on the Nintendo Wii creates a genuine sense place that sucked me into its universe. While the realisation of the world played a part in my immersion it was the innumerable subtle cues that really convinced. My captivation allowed the game to lead me and manipulate me. With almost nothing spoken I was able to empathise with my character every step of her journey.

You can support Alex by buying Metroid Prime Trilogy