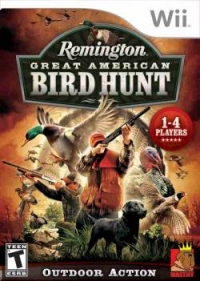 Remington's Great American Bird Hunt stands as a relic, a living fossil but on these terms it's almost lovable. It could perhaps be best compared to a Coelacanth in terms of where it stands in the evolution of light gun gaming. It seems to have ignored the advancements made in the genre by series such as Point Blank and Time Crisis, offering no discernable improvements over twenty year old titles.

Beyond improved graphics, Bird Hunt brings very little to Duck Hunt's classic formula. Picking off hapless wild foul used to prove novel because it gave me the chance to actually aim a gun at my friend's television but now I expect something more.

My real issue with Bird Hunt rests in its source material. I am not averse to shooting digitized animals, but they offer very little in the way of challenge. By trying to replicate a real world experience the game simply cannot offer any excitement when all I am doing is shooting (forgive the pun) sitting ducks.

I don't need my targets to shoot back at me, Point Blank offered challenges to test a range of skills without ever threatening death. Unfortunately, Bird Hunt's lack of abstraction means that the birds never reach the insane pace of the targets in comparable titles. Bar a few sections where my Labrador startled birds from the long grass in to the air the game never tested my reflexes. Even the occasional added twist of illegal targets did naught to re-energise my interest - though I can now spot the gender of a turkey.

Years of playing more frantic and scripted light gun shooters have perhaps spoiled me, but I don't think my expectations are unreasonable.

To help accommodate for the Wii controllers inaccuracy, a cursor is constantly shown on screen. For me the exciting element of shooting is the skill required to be accurate. When I shot clay pigeons it was exciting because I had to compensate for the recoil, archery was challenging because of the skill in controlling my breathing and even light gun games required I have the hand eye coordination to pick off targets using the sights on my plastic gun. Bird Hunt just requires me rest my cursor over the bird I want dead. It makes power ups like Hunters Vision and Hunting Glasses laughable to the point I half expected the game to drop a blunderbuss to help me kill my unsuspecting prey.

Years of playing more frantic and scripted light gun shooters have perhaps spoiled me, but I don't think my expectations are unreasonable. The game's failings are a result of its source material; short of giving the turkeys hand grenades it was probably never going to satisfy me. It could prove an interesting diversion to someone interested in hunting, but I honestly don't know anyone like that.