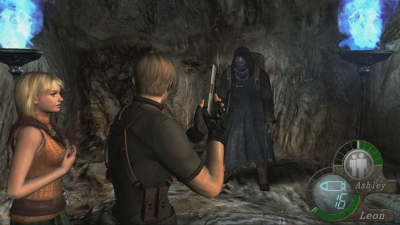 Resident Evil 4's classic style takes a while to get used to, but once you're in there are plenty of genuinely scarey moments to enjoy. The thrill here is more from the plodding death march of your zombie foes rather than the grusome shocks of Resident Evil 5, but still the quality shines through. Another one for the grown ups in the family.

Initially released on the Gamecube and then, with a few updates, the PS2 in 2005, Resident Evil 4 was rightly recognised as one of the best in the genre. A couple of years passed and with the Wii distinctly lacking in ‘grown up' content and having the tools, in the WiiMote & nuchuck, to deliver another new angle Capcom released Resident Evil 4 : Wii Edition to a deafening roar of approval from the gaming community.

Another couple of years have passed and we now have RE5 on the next gen platforms, but what of RE4? Has it stood the test of time? Can it still deliver the intense gameplay and visceral thrills that were so applauded back in 2007?

Most of the other super-mutants you'll come across, has an exploitable weakness.

Without getting bogged down in the detail of which button does what, it's clear that the use of the WiiMote for aiming (in this version using a targeting reticule rather than a laser sight) makes those critical headshots a lot easier than with a gamepad. There's also the added ‘connection' you get as you actually aim something rather than twiddling a thumb-stick. And with the never-ending hordes of, fortunately not that speedy, villagers drooling at the sight of your juicy neck you'll certainly be thankful for all the assistance you can get.

My biggest problem with the game however was general movement. Having to stand still while shooting may be a way of building tension, but I found it irritating, and I was constantly pushing the nunchuck stick forwards in an attempt to move, only to find myself looking at my feet or the sky instead of at the rabid villager about to take a chunk out of my face. Add that to the ultra-slow turning and running and you've got a recipe for much annoyance. At least in my book. I know it depends what you are used to and if you've grown up with the RE games it may all come as second nature. But if you're used to running and strafing you'll need to take time to adjust.

The mix of locations are rather strange - starting with villages and countryside before progressing to ancient castles and even high-tech laboratories. Indeed I had to smile as I came across a surgical area that bore a striking resemblance to one in Dead Space - complete with the almost unstoppable, regenerating monster! This, like most of the other super-mutants you'll come across, has an exploitable weakness - but this one certainly ratchets up the tension as you have to use a thermal imaging scope on your rifle to find it. Given the difficulty in targeting the shambling beast when it is close up with this weapon, you're in for sweaty palms time as you desperately try to take out the leach-like creatures that are its life source.

Ammo is, for the most part, quite plentiful - with lots to pick up from smashed barrels, despatched enemies, or just lying helpfully around. You can't buy any from the merchants you come across which seems a little odd, but when you tune up your weapons you'll sometimes get rewarded with a full clip. I have however been in several situations where I have been desperately short of ammunition and had to resort to my knife and martial arts skills to despatch some foes. My son has also encountered this and unfortunately is actually in a situation where he can't progress because there is no way to get any more ammo. I've not got to that point yet but it's been pretty close a couple of times.

There are some very tense moments where you're battling to stay alive against some mutated horror.

As for whether RE4 is a scary game - I can't say it has ever hit me in that way. Sure, there are some very tense moments where you're battling to stay alive against some mutated horror but there didn't really seem to be any major tension-building segments that would have had me yelping as something gross dropped on me from above. The music and sound effects certainly do their part in creating a tense atmosphere but never make it buttock-clenchingly scary.

RE4 is however a pretty long game - I'm currently just hitting the 20 hour mark and still get the feeling that there a quite a bit left. So you certainly get your moneys worth - and its not long in the drawn out sense, the new environments and plot mechanisms always keep the interest level up.

I must admit I wasn't that impressed when I started playing. The controls were really wearing me down. But I persevered and I can now say that I'm glad I did. I'm really enjoying RE4 Wii edition and can't wait to see it through to the conclusion. For the price that you can get hold of it nowadays it's a rock-solid buy recommendation, just remember to persevere with the controls.

You can support Alex by buying Resident Evil 4