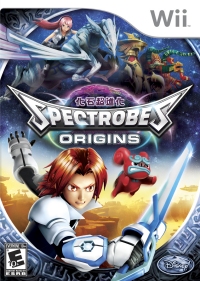 Spectrobes: Origins has all the gloss and quality you'd expect from Disney. Although not hugely improving on Spectrobes: Beyond the Portals this is a strong Japanese style Role Play Game once you get past the sacchrine visuals and storyline. That's about as scary as it gets though.

Spectrobes Origins is a game that screams Saturday morning cartoon licence. Each character felt only half realised making me constantly feel like I was missing something. The Disney logo emblazoned through out the game's packaging convinced me still further that there was something more to this. The perverse thing is Spectrobes is solely a game franchise. Initially created for DS as Spectrobes: Beyond the Portals by Jupiter games there are no accompanying toys, comics or cartoons. The original game was favourably received on Nintendo's handheld, and now it is making the jump to Wii under the reigns of developer Genki.

But Spectrobes surprised me with its competency. My initial impression was that of mild horror. Not in the scary way, but in the 'Oh no what have I gotten myself into' way. Saccharin sweet anime style characters filled the screen with high pitched chirpy voices, teen American accents immediately reminding me of my few encounters with the Mickey Mouse Club and made all the worse by the occasional of Japanese exclamation. Terrifyingly calculating in its focus tested design. As a man nearing thirty this felt more akin to somebody killing a cat with a chalkboard than dialogue.

Because of this it stands alone as one of the first games in which I was thankful when the exposition switched from spoken to written. It wasn't that the text was any better in its content but once the words switched from the personality bleached voices of a Saturday morning cartoon and into my own inner voice it became instantly less off putting, and perhaps even forgivable in its straightforwardness given the target audience.

If, however, you have children and can get through the game's by the numbers story, then there is a solid Japanese action role-playing game hidden underneath.

The simple story is designed from the ground up for kids, centring on a pair of teenaged galactic cops who could command 'Spectrobes' (think Pokemon resurrected from fossils). They are sent on a routine mission, by an overly melodramatic commanding officer, only to get sucked through a wormhole and become stranded in the far reaches of space. Immediately they receive a distress call alerting them that a nearby planet is under attack by the 'Krawl'.

Usually I wouldn't bore you with all that, but if that brief extract from the first hour of the game has you rolling your eyes then Spectrobes Origins is probably best avoided. If, however, you have children and can get through the game's by the numbers story, then there is a solid Japanese action role-playing game hidden underneath.

It made interesting use of the Wii's motion capabilities and allowed me to control my characters attacks directly while using the Wii-mote and Nun-chuck to direct and command my Spectrobe who was fought along side me. The addition of co-op also means that the more fiddly aspects of combat can be alleviated, as the second player is able to control the partner Spectrobes directly. An ideal solution any younger players who may struggle at times by allowing them help from a friend or parent through more difficult sections.

Memories of horror films spun in my head as I imagined a parallel game where the unleashing of these creatures from the deep unlocked blood plagued monstrosities.

Of course the biggest hook of the game is the Spectrobes, creatures that unabashedly steal from the 'Got to catch' em all' school of gaming, that at least manage to implement their collect-a-thon in novel fashion. Because Spectrobes begin as fossils you are forced to excavate them rather than battle them to add them to your party. It is an entertaining diversion from the main game, and required that I had to cut, drill and dust rock away from each specimen as I found it. Memories of horror films spun in my head as I imagined a parallel game where the unleashing of these creatures from the deep unlocked blood plagued monstrosities.

But here, we move from this chiseling to 'awaken' with rhythm action mini game. Biological/geological accuracy (and horror fantasies) aside it is an incredibly entertaining mini game that, when combined with their function in battles, make them more than just a meaningless gimmick.

Spectrobes Origins impressed me by entertaining despite itself - thanks to its combat and excavation. While assuming a game will appeal to children is a little presumptuous (I remember being quite fickle about my interests twenty years ago) it is a game that I can happily imagine sitting through with a young relative and enjoying with them.

You can support Alex by buying Spectrobes Origins