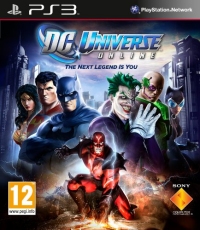 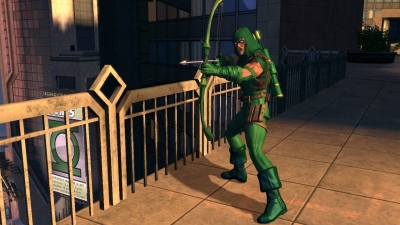 Fred and Bob invent their DC Universe Characters tonight, but find all the best names have been taken.

Scene: Bob and Fred are sat on a sofa with two PS3 controllers . Bob is dressed in an idiotic tight fitting costume.

Bob: He flies through the night with a grace and ease that puts the worlds best acrobats to shame.

Bob: Villains fear the shadow that glides through the darkness.

Fred: What are you wearing?

Bob: For they know that when his shadow appears, he won't be far behind.

Fred: That's got to be the stupidest name for a superhero I've ever heard.

Bob: Oh is that right FreddieFreeze.

Fred: How did you know?

Bob: I saw you building your character last night.

Fred: Well my character is allowed to have a stupid name

Bob: And why exactly is that?

Fred: Cos I'm a villain,

Bob: An what difference does that make>

Fred: Villains are allowed stupid names, it makes them even more... villainy.

Bob: So why can't heroes have silly names?

Bob: Oracle is my guide and Batman is my mentor.

Bob: That's what you get for being a villain.

Fred: Well BatBow I...I'm sorry but how exactly did you come up with that ridiculous name?

Bob: Well I wanted to be like Batman so I took his look and chose acrobatics and gadgets as my skill set.

Fred: Where as I chose flight and freeezy powers.

Bob: Right, and as my weapon I chose the Bow. Like Green Arrow. And I wanted to call my hero Black Arrow.

Fred: So why didn't you?

Bob: The name was taken so I tried Target.

Bob: Yes all taken! So all that was left in my head was BatBow.

Fred: Do you kinda wish it had been taken?

Bob: No! It's an awesome name for an awesome hero, I'll have you know I've completed all the main missions.

Fred: Which are so repetitive.

Bob: Totally! And I completed the mentor stuff and I'm now officially a member of the justice league! But get this right. You get to level 30 and you can't get any higher!

Bob: And the game doesn't end.

Fred: Well it's an online game. Is it meant to end?

Bob: Well I think it should. I'm starting to get bored and the only things I can do now are repeat levels on a harder setting or do these annoying group missions where you have to rely on other chumps not disappearing halfway through.

Fred: You're not really a people person are you Bob?

Fred: You wait I'll get you yet BatBow.

You can support Adam by buying DC Universe Online