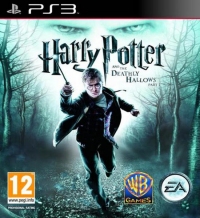 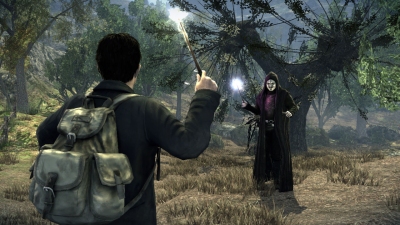 Fred and Bob review Harry Potter and the Deathly Boredom as they call it and find it to be more Harry Ramsden than Harry Potter.

Scene: Bob and Fred are sat on a sofa with two PS3 controllers .Bob has a magic wand and is pointing it at the screen.

Fred: Bob what are you doing?

Bob: I'm trying to magic up a good game.

Fred: What do you mean we already have a game to review. It's the new Harry Potter game.

Bob: I know. Harry Potter and the Deathly Hallows Part One.

Fred: Or as I like to call it Harry Potter and the Pointless Cash-in.

Bob: Exactly Fred. It's a bit pants so I'm trying to use Harry's wand to make the game good.

Fred: Indeed it's just not a good game I'm afraid. It's a cover shooter mainly but it's completely full of glitches an bugs!

Bob: It's more Hogfarts than Hogwarts.

Fred: Bob you can't say that.

Bob: I think you'll find Fred that I just did!

Fred: I suppose you did. You see the problem comes from the fact that it's too diluted. It follows the film, which in turn follows the first half of the last book.

Bob: Which follows my hand turning off the console in disgust.

Fred: It seems like they took all the good ideas from other third person cover shooters.

Bob: And ignored them completely.

Bob: And that's when there is any cover to choose.

Fred: I'm afraid theres not much good to say about it.

Bob: Apparently the x-box version has a Kinect section, but I played in on the ps3 so a fat lot of good that does me!

Fred: So unless your child is a Harry Potter obsessive.

Bob: Avoid this one like the plague! It's more Harry Ramsden than Harry Potter!

Fred: We've been the scripted gamers and we've both agreed for once.