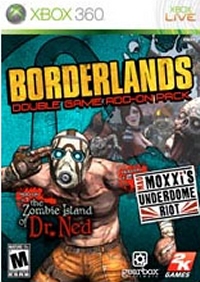 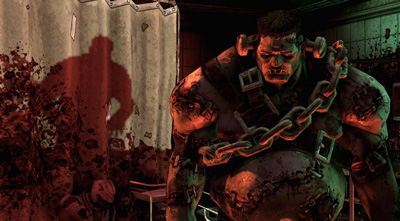 The Island of Dr. Ned download content for Borderlands is a welcome friend in my house. I haven't been more surprised this year than with my compulsive love of Borderlands on the Xbox 360. It just goes to show that despite my adoration for deep and meaningful videogames, I still enjoy the cathartic process of blowing stuff up (see Red Faction: Guerrilla) or shooting bad guys with a multitude of different weaponry.

This first instance of downloadable content - The Island of Dr. Ned - condenses much of the 30+ hour experience of the original game into a four hour romp through some very different landscapes and environments. It even addresses one major flaw of Borderlands by actually including a narrative to the experience, complete with an introduction and conclusion narrated by Ivan, Pandora's seemingly omnipresent weapons seller.

The premise of this Borderlands expansion is excellent B-movie fodder - you arrive at Dr. Ned's island and find out that the good doctor has 'accidentally' created a never-ending stream of the undead. It naturally falls to you to help him correct his mistake by putting various bullet-shaped holes into the zombies and going on the typical stream of quests that Borderlands has at its core.

Gone are the bleached-out visuals of the Arid Hills around Fyrestone and instead you have the gloomy swamps and heavily wooded environments that bring a sense of claustrophobia and unease into the game.

This DLC adds around 50 of those new quests, but the biggest change I experienced was how different the look and feel of the game was. Gone are the bleached-out visuals of the Arid Hills around Fyrestone, instead you have the gloomy swamps and heavily wooded environments that bring a sense of claustrophobia and unease.

Let me be clear, this isn't suddenly an early Resident Evil or Silent Hill, but I found the change dramatic enough to feel uncomfortable - particularly when fighting against the zombies for long periods of time. The evil red eyes of the infected ravens and the way the zombie midgets fling themselves around in such a savage way started to get under my skin. The game doesn't shy away from pitting a lot of undead against you at the same time. I was frequently overwhelmed and surrounded - a situation completely unfamiliar from the rest of Borderlands.

Playing a lot of the content for laughs with several winks to the camera and a certain Brothers Grimm design aesthetic, I thoroughly enjoyed this add-on download content for Borderlands. Changing the mood and the environment of the game completely gave me a much visually darker and, at times, an uneasy feeling when trudging through the zombie-infested swamp-lands. Even after release Borderlands continues to be my surprise hit of the year and this content furthers my adoration for its atmospheric setting and simple mechanics.

You can support Adam by buying Borderlands The Island of Dr. Ned DLC