Call of Juarez: Bound in Blood 360 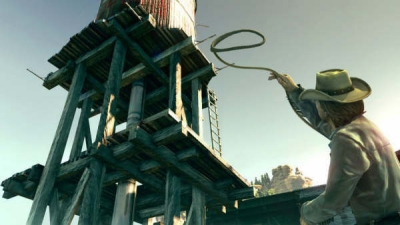 Dodging the usual clichés and tropes of the Western genre, I found Call of Juarez a thrilling ride of love, lust and betrayal. It captured the look and feel of an 1860’s America perfectly and the drama that unfolded through the story was surprisingly powerful.

One aspect of Western games that I’ve always found lacking in previous efforts was the epic scope of the landscape the stories are played out in. Not only did Bound in Blood excel at showing a twisted brotherly relationship, but it portrayed those events against some breathtaking scenery and epic story elements.

Starting off the game as one of the McCall brothers in the Civil War was an interesting way to introduce the characters and world. Playing as a Confederate soldier was a move I never expected this game to successfully portray. What made it memorable was the sense of urgency I felt to find my brother in those opening sequences. Building these emotional and affectionate ties from the off gave believable weight to the relationship between the two characters, making their homecoming all the more meaningful.

Not since Alyx in Half-life 2 have I felt such a strong connection to another character and this love-hate relationship is what makes Bound in Blood so compelling to play.

These first few levels were so impressive I was disappointed when the game moved on to a more traditional Wild West theme and pushed the story past the Civil War. I feel there’s plenty of room for a deeper experience based on the American Civil War and the brief glimpse of this bloody conflict reminded me of Sergio Leone's masterpiece The Good, the Bad and the Ugly

But my disappointment didn’t last long as the characters in Call of Juarez are some of the most believable I’ve seen. The two main McCall brothers act and behave just like real siblings. Whilst I was fending off enemies I was snidely complemented or berated depending on how I performed. This sense of brotherliness held true throughout the game and during the odd level when I was on my own I really felt my sibling’s absence - like half my character was missing.

Not since Alyx in Half-life 2 have I felt such a strong connection to another character and this love-hate relationship is what makes Bound in Blood so compelling to play. Each brother has a different personality and I could feel the difference when playing as either Ray or Thomas - I even had a favourite based on their personality. The most telling part was during a precarious descent down a sheer mountain face via rickety old wooden scaffolding. The brother I was playing, just like me, hated heights and having a character express the same emotions I was feeling, and consistently act throughout the game like that was a real treat.

Making these two leads believable and real meant that some of the other characters came off a little shallow at times. Marisa, the girl behind the brothers destructive lust, seemed intriguing at first with her manipulative and scheming ways and I wondered if she would end up being an unusual and exciting female villan. But as the game reached its conclusion her character seemed to fade into a very one-dimensional sex-object, albeit closely modelled on Penelope Cruz.

Despite the slightly stereotypical portrayal of the Native Americans, the narrative was still strong enough to give me the most powerful response of the entire game.

The third brother, William, acted as the game’s moral compass and was an earnest, god-devoted narrator for much of the plot. He was the only character I found irritating and I feel as if he was designed deliberately to fulfil that role - acting as piously and whining often about his fate. I could so easily have shot him several times to shut his Christian rhetoric up - not really the desired response to a morally grounded narrator.

The characters I found most interesting of all were the Apache and the relationship between the leader and his half-breed son. There was the potential for a much closer look at these two and I feel the game would have benefitted from having a few levels playable from their perspective. Despite the slightly stereotypical portrayal of the Native Americans, the narrative was still strong enough to give me the most powerful response of the entire game. His emotional and anguished narration at the beginning of the final act struck a deep chord with me that deserved to have more of the story backing it up.

The overwhelming feeling I had when the credits rolled was how consistent and complete this story was. Everyone reacted in a realistic way and even though I found the religious theme of redemption a little melodramatic, it was the perfect way to conclude this character-based game. It was this focus on characters that set it apart from any other Western game I’ve played and putting people first before any clichéd set-pieces led to a believable world and story.

You can support Adam by buying Call of Juarez: Bound in Blood