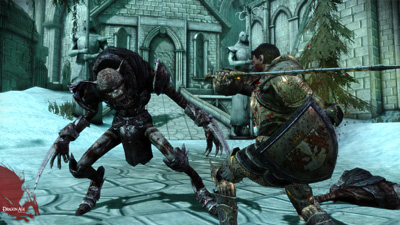 Return to Ostagar is a disappointing downloadable addition to Dragon Age: Origins that falls woefully short of the high quality set by the original game.

Journeying back to the site of the dramatic battle that ended in disaster and destroyed the Grey Wardens was an exciting premise that I initially thought would make a tremendous addition to the game.

The sight of the destroyed barricade, the still-rotting corpses and the discovery of King Cailan's body all gave me that mournful and dark air I enjoyed about certain aspects of Dragon Age to begin with. Unfortunately the lack of any real narrative and the weak procession of combat scenarios sucked the soul out of any potential this DLC had.

That's not to say it doesn't have flashes of pathos and the brief flashbacks to your meeting with King Cailan and the subsequent battle with the Darkspawn lend a suitable dark atmosphere to the quest. But it really lacks any kind of punch to make this the central focus of the content. After traipsing around the battlefield and looting Darkspawn corpses to retrieve the King's armour, I realised that this character didn't have any meaning for me as a player or for my own Grey Warden.

The lack of any real narrative and the weak procession of combat scenarios sucked the soul out of any potential this DLC had.

I also found it extraordinary that no mention was made of Duncan when I played through Return to Ostagar. I even looted some of his gear from a Hemlock corpse but the game never brought his existence up - a bizarre absence considering how important he was to Alistair and how fundamental his role was in all six origin stories.

Return to Ostagar is a poor addition to Dragon Age: Origins, bested by the release-day DLC, Wardens Keep and The Stone Prisoner by some margin. There's no continuation of an epic tale, no moral decisions to make and subsequently no point in playing this content. I can only hope that the torture Morrigan endured by having to listen to the excruciating flirting between Alistair and Wynne was equal to the 50 minutes of utter boredom I suffered with Return to Ostagar.