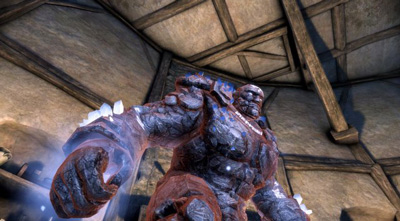 The main reason for this is the character of Shale - the Golem you free after helping the villagers fend off a Darkspawn attack. His personality is reminiscent of HK-47 from Knights of the Old Republic and it seems like all of Bioware's most acerbic and witty writing went into voicing this utterly fantastic character.

The village of Honnleath also contains a brief encounter with a feared abomination demon and resolving this situation involves some tough choices. It's a typical Dragon Age quest that puts you in an awkward position where there's no clear good or bad option. There's no easy, paragon-good solution handed to you on a platter like KOTOR or Mass Effect and it's good to see this dark tone continuing with The Stone Prisoner.

But the pack's best content is the character of Shale and having him in your party throughout the rest of the game is an eye-opener because of his aggressive yet apathetic attitude towards everybody, including you. More interesting is the opportunity for taking Shale through Orzammar. Here you'll find that the inhabitants of the Dwarven city both fear and admire you for having a Golem in your party and his presence adds some personal motivation to your time there. Unless your origin story began in Orzammer I found this section of the game difficult and, on occasions, boring to play through. Previously it had been the section of the game I least wanted to go back to, but with Shale in my party, Orzammer suddenly became a much more interesting setting and it made the conclusion of ‘A Paragon of Our Time' quest far more meaningful.

But with Shale in my party, Orzammer suddenly became a much more interesting setting and it made the conclusion of ‘A Paragon of Our Time' quest far more meaningful.

The wider depth and care that's gone into this character is incredible and his inclusion makes the world of Dragon Age: Origins that little bit more colourful and humorous. Sadly the decision to have this as release-day DLC and not include it with the original game will taste sour to many. I must admit that issues of price or DLC pacing never usually come into consideration for me, but The Stone Prisoner feels a little cheap for making players shell out 1200 Microsoft/Bioware points (Ł10 on PSN) for, what feels to me, an integral part of the game.

Despite this issue the content in The Stone Prisoner is nothing short of excellent and along with Warden's Keep, it gives me hope that Bioware will continue to support this game far into 2010.