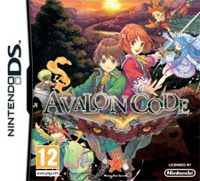 I really wanted to like Avalon Code DS. Recording information in the Book of Prophecy was a unique way of mixing the storyline and combat into an interesting, if a little morbid, mechanic. Yet as the game progressed any deep meaning Avalon Code could have inspired was drained by frustration and unnecessary complexity.

Though I love RPGs more than any other genre of videogames its reliance, especially from Japanese developers, to stick to familiar scenarios and clich's can drain even my enthusiasm after a while. So when I found Avalon Code offering a few unique twists with its combat system I was hopeful this would be a very different and more soulful RPG experience.

The game started out in a fairly predictable fashion with the ultimate destruction of the world looking like the inevitable motivation for my next 40 hours of play. I was surprised to find that Avalon Code brushes off that premise pretty quickly and makes you the sole saviour of the world in a very different way. Instead of battling a definite antagonist or hordes of demonic entities, I found myself cataloguing every encounter, person, monster, items, weapons and flowers in the Book of Prophecy. This was all in an effort to record the lifeforms and objects worth saving for the next world born from the ashes of the current one.

Those morbid themes and the way Avalon Code just assumed that the world was ending and charged you cheerily with the business of playing Noah's Ark was a refreshing narrative to experience.

It was welcome change from the usual premise and the way the mute protagonist accepts this fate as the harbinger of destruction with little reaction felt more grown-up than odd. Angst-ridden heroes only serve to alienate the mature audience and Avalon Code feels far more grown-up than many other RPGs despite the cutesy visuals offered by the DS. Those morbid themes and the way Avalon Code just assumed that the world was ending and charged you cheerily with the business of playing Noah's Ark was a refreshing narrative to experience.

The way the game recorded this information was also appealing as the bottom half of the DS almost exclusively displayed the dusty old Prophecy tome. Its crinkled pages were reproduced with a great ancient and austere style that made it feel like the book had a personality itself. Each time I collected the blueprint of a person or item it would create a new page with a 3x3 or 4x4 grid of attributes. These 'codes' could then be taken away or new ones added to change the make-up of the particular entry. It was a remarkable idea that gave me the disturbing sense I was a meddling God playing with the genetic make-up of all life.

It was a remarkable idea that gave me the disturbing sense I was a meddling God playing with the genetic make-up of all life.

Of course this process had huge significance when it came to facing certain enemies. Once I had copied the data into the book I could replace its strength attribute with a weakness one and thus improve my chances of beating it. Similarly I could alter the make-up of my items meaning I could imbue the power of fire onto my sword to help open a secret door. It lent a huge amount of depth to this title and I found myself experimenting with different codes just to see what could happen, even if it meant making things worse for myself by giving weaker enemies greater powers.

My ultimate takeaway from this mechanic was a feeling of austerity and melancholy that purveyed the world despite its cutesy nature. I love having that juxtaposition of light and dark, especially when it when it appears to go about its business in such a gay abandon. However, all that great work that the first few hours built into my experience was ultimately undone by the controls and business of actually using such a thoughtful system.

With so many RPGs sticking to a tried and tested formula it's sad that the morbid nature of the tale was tethered to a clumsy mechanic.

As soon as I built up the Book of Prophecy to more than 20 pages it became a frustrating and awkward experience to physically navigate. Moving pieces of code around also costs magic points and this really cramps the creativity the game initially offers; stacking up code entries and trying to get to page 356 from page 12 really sucked the soul out of the whole concept.

It's also hampered by how much customisation you can build into your weapons. Not because it becomes confusing but because doing simple things like changing your weapons over becomes an arduous process of fiddling around with code segments. What especially killed the game off for me was spending 20 minutes coding a weapon with the correct fragments only to find I was short of magic points and unable to beat the encounter I was working on.

There nothing worse than seeing the hints of a deeper game ruined by the very methods that make it so unique and promising. As such Avalon Code for the DS felt more like a proof of concept than a fully realised and developed game that its underlying concepts deserved. With so many RPGs sticking to a tried and tested formula it's sad that the morbid nature of the tale was tethered to a clumsy mechanic.

You can support Adam by buying Avalon Code