Knights in the Nightmare DS Review

Knights in the Nightmare DS 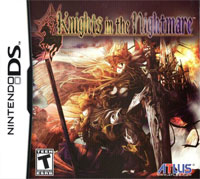 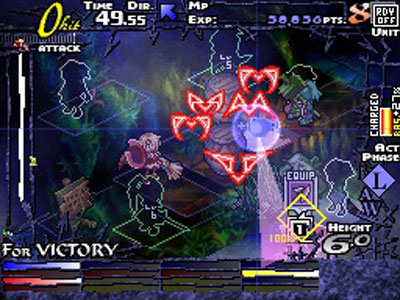 Knights in the Nightmare DS is a genuine curiosity. It's the most challenging role-play I've tried for some time. It mismatches tactical adventuring with shooting elements, all wrapped up with expert storytelling that left my head and heart spinning.

Telling the tale of the kingdom of Aventheim, Knights in the Nightmare is a tactical role-playing game that also blends in aspects of arcade shooters to keep the game play fresh and complicated.

Usually videogames have a balance of simple stories and game play, occasionally diverging into complexity for strategy or role-play experiences. Knights in the Nightmare is a gleeful blend of complexity and difficulty.

The kingdom of Aventheim dazzles and confuses from the off. From the cast of characters to the political intrigue and betrayal there is a lot to take in. It doesn't help that the narrative jumps around in time, adding a layer of depth that accentuates the variety of opinions on offer as the game progresses.

It's a confusing mix of storytelling devices that required my utmost attention to keep up. Fortunately, the pace is measured and enables you to digest the narrative in bite sized chunks while you are figuring out the game play.

Controlling a lost soul - shown on the screen as a wisp - you have the ability to jump into the bodies of fallen knights and do battle with the forces that stand in your way. Each battle takes place in a small environment where you manage equipment, weapons, movement and attacks.

Getting to grips with both a complex narrative and a ton of game mechanics is dizzying. To help, I got into the habit of taking notes on the story and game play - something that took me back to days when PC games required degree-level physics and maths to complete.

If you're willing to devote time to understand the nuances and strategy there is a big reward here.

If you're willing to devote time to understand the nuances and strategy there is a big reward here - a moving experience. As the game play mechanics start to make sense the story really starts to take off. Though the learning curve is steep it's a tremendous feeling to stand on Knights' mountaintop and master its many challenges.

Underpinning this is some unusually soulful story telling. As I became accustomed to the game's narrative the understated way things unfold became compelling to watch. There's no expensive cut-scenes or pre-rendered instances - it all takes place via the in-game engine and mostly by text.

Yet, with simple writing, an evocative turn of phrase and clever directorial tricks it had as much impact for me as any HD home console game. It's not a million miles from the DS Dragon Quest remakes, although it's not comparable visually, the same deep experience is created with simple sprites and text.

With simple writing, an evocative turn of phrase and clever directorial tricks it had as much impact for me as any HD home console game.

When the story gives up its secrets, and the truth of the lost soul is out, I was really moved. The use of multiple perspectives and moving back and forth through time is really something quite special.

Combine this with the spectacular strategic game play and you have an experience that feels more colourful and interesting than anything before. Knights in the Nightmare for DS won't appeal to every strategy RPG fan and its challenging game play will tax even the most ardent of enthusiasts. But, get beyond this and you'll discover a world that's deeper and more complex than anything you've played before.

You can support Adam by buying Knights in the Nightmare