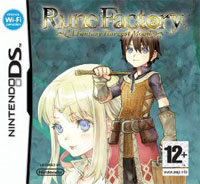 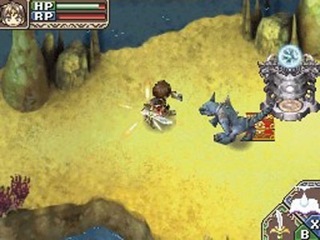 Rune Factory for the DS is a delightful and cutesy game straight from the stable of Harvest Moon or Animal Crossing. Though almost overloaded with sugary sentiment I couldn't help but find this one of the most restful and inoffensive games I've ever player. It doesn't succeed with the unnecessary combat but the pastoral nature of farming and the interaction with the townsfolk give this game an unusual, if slightly odd soul.

My first impressions of Rune Factory for the DS were downright lousy. The idea of playing as vacant avatar, tending crops for a few measly gold coins and trying to interact with the most bizarre collection of characters didn't strike me as a fruitful pursuit of my time. It doesn't help that I work outside for a living, so the thought of working on the land isn't as appealing as it obviously was for the Japanese developers of this game and the Harvest Moon series.

The premise of becoming a farmer is equally poorly implemented by the game's beginning. Even though it has enough humour to poke a little fun at its own setup it still expects you to go along with the ridiculous idea that you're happy working on a field after waking up with amnesia. Those awkward interactions in the beginning sowed only the seeds of discontent as I trudged through the clumsy controls and started tilling the soil and sowing Radish seeds.

Even though it has enough humour to poke a little fun at its own setup it still expects you to go along with the ridiculous idea that you're happy working on a field after waking up with amnesia.

It was all painfully dull stuff from a game that had 'adventure' written underneath the title on the DS box. The only adventure I experienced was going into town and witnessing all the atrocious dialogue between the NPCs and wondering whether or not I was supposed to hate each one more than the last with reckless abandon.

There was no redeeming quality to the 'game' and I felt for the first time in my stint as the Soulful Gamer that this was a title completely and utterly devoid of soul and purpose.

Twenty-five hours later nearly everything I thought previously has been proven false and I'm not even sure I know how to explain myself. Somewhere, in-between hours two and four I began to think about Rune Factory outside of playing it. I began to think about the world I inhabited and how light and fluffy it was compared to the real world. I always used to play games for pure escapism; to forget all the cares of my life and put off my responsibilities for another day.

Twenty-five hours later nearly everything I thought previously has been proven false and I'm not even sure I know how to explain myself.

That same feeling returned to me the longer I played Rune Factory. In amongst the heavy and serious games I was playing this one was my safe haven; a retreat from any stress and complicated experiences I was having elsewhere.

That may sound like Rune Factory is paper thin in its content or doesn't offer any significant challenge. While its true that the visuals and premise couldn't be simpler I found the game could offer me a complex economic model, a dungeon crawler and a dating sim with several levels if I so wanted. As it turned out I didn't really want all those things mixed together and the combat in the game is truly terrible if you choose to venture into the caves around the town.

Instead I concentrated on farming and eventually building up my ramshackle house to be more attractive and functional. Soon I was cooking and crafting as well as producing crops to sell to the town. This gentle path I took led to a very peaceful and restful experience that, despite my initial misgivings, came with its own unique soul.

I ended up creating a glorious farmhouse and wooing the lady of my choice to start a family. It felt like being part of a quaint old courting ritual that would only exist in romantic people's minds. Buying or making cookies to give to the girl of my choice on the right day, or making a fuss of them on their birthday felt like the kind of lightweight and platonic courting I almost wished existed in the real world.

This gentle path I took led to a very peaceful and restful experience that, despite my initial misgivings, came with its own unique soul.

It also succeeded in portraying a very Pagan lifestyle with the cycles of the seasons and the circle of new life, growth, death and rebirth coming through from its farming simulator. The only blot on this landscape was the inclusion of a church and priest that felt totally out of place in this pastoral land and postcard village.

It's easy to suddenly sit back and think that Rune Factory for the DS is a game made for the ultra-casual Farmville market. Something 'real' gamers should throw into the street and drive their hardcore Hummer truck over as they motor towards a Demon's Souls or Final Fantasy. This would be an injustice to Rune Factory and the type of game it's trying to present.

Rune Factory on the DS is an opportunity to live a restful, peaceful life in a virtual world. Yes, the idea of settling down and having a family within the confines of DS game should feel a little odd and bizarre. But I was happy that I'd put the effort into making it work and came away with something far more meaningful than I initially thought.

You can support Adam by buying Rune Factory