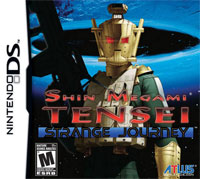 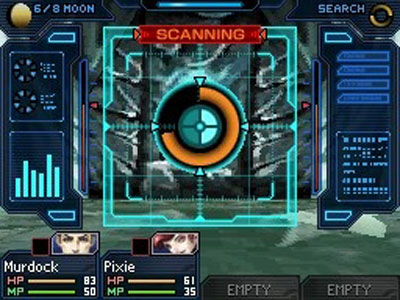 Shin Megami Tensei: Strange Journey is a claustrophobic RPG that constantly feels oppressive and dark. Mixing demonic battles with more adult themes this balances atmosphere with the traditional role-play mechanics. This is the kind of soulful experience that's all too rare on the DS.

Harking back to the Famicom days of Shin Megami Tensei, Strange Journey is presented in a first-person perspective and throws out the cute, school-based antics of the Persona series in favour of something much darker and interesting.

Instead of balancing your social life with the demands of battling demonic entities as in other MegaTen titles, Strange Journey throws you straight into the lion's den. When a strange anomaly is detected in Antarctica an international force is sent to investigate. This predictably goes awry and you're charged with combating the threat facing Earth from the demonic hordes that threatened to emerge from the Antarctica anomaly.

The twist here is that the demonic hordes are not only the enemy, but also friends. Just as in the first Persona game, recently remade for the PSP, you can converse with the demons as you progress through the levels. It's these interactions and eventual recruitment of the enemy to your cause that makes the game unique.

Having Jack Frost and Pixie on your team as the demons that they are, rather than simply aspects of another characters persona, makes Strange Journey otherworldly and uncomfortable. It's a feeling that's mirrored in the environments you descend into as the journey begins.

In true Rogue-like fashion these dungeons can be tough and unforgiving. It's easy to progress further than you should and end up stranded far away from base or a teleport device that means certain death. It can be annoying and unlike modern equivalents to be kicked back to the title screen on death. In this game you have to manage your progress by constantly consolidate experience and skill points.

Being in a constant state of nervousness and anticipation makes the experience far more meaningful than the hand-holding of other, more modern RPGs.

Usually I would find these mechanics soulless and annoying - detracting from the spiritual story the game may want to tell. In this instance thought, the difficult mechanic of progression and acquisition of demonic allies is the game. Being in a constant state of nervousness and anticipation makes the experience far more meaningful than the hand-holding of other, more modern RPGs.

Even though the restrictive visuals of the DS are plain to see and the lack of audio interaction reduces the impact of some of the scenes, it still doesn't prevent a tangible atmosphere developing. There are shades of Alien here, of the grimy disgusting nature of alien lands and the bleak emptiness of the unknown.

It can all get too much at times. Strange Journey isn't a game that I could willingly give four or five straight hours to - the cloying atmosphere can certainly be a downer if you let it get to you at the beginning. The repetition of the dungeons can also drag a while despite their varied art-style. It's a little like Persona 3's Tartarus tower in that you can despise its length and seemingly never-ended ascent, but equally enjoy the endless grind and constant acquisition/fusing of powers and demons.

What pulled me through was the plot. In many Rogue-likes like Shiren or Etrian Odyssey the story takes a backseat to the exploration and mapping of the dungeons. With Strange Journey a far more intriguing narrative is wrapped around the same mechanics and infuses the game with a dark and interesting soul that doesn't fail to engage.

There are shades of Alien here, of the grimy disgusting nature of alien lands and the bleak emptiness of the unknown.

By moving the location of this tale from a high school or post-apocalyptic Tokyo to an ethereal real-world makes Strange Journey feel grounded. It's subtle with its science-fiction and the investigation into the anomaly and the fate of your team feels like something a British Sci-Fi drama could portray as equally effectively.

Strange Journey DS is old-school in its approach to progression and combat. That aside, I found its atmosphere and story a real draw. This is a very different DS experience than what you'd normally expect and as such Shin Megami Tensei: Strange Journey was ultimately and hugely rewarding.

You can support Adam by buying SMT: Strange Journey