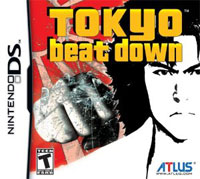 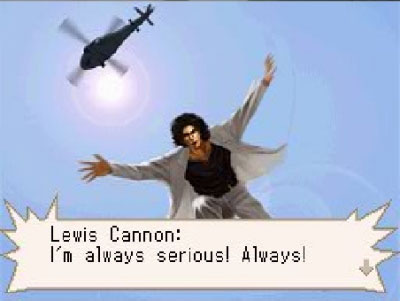 Tokyo Beat Down is a big pulsating pun, but happily one with a big heart. Somehow this little game gave me the warm fuzzies, despite derivative brawling game play straight out of the 80's.

Beat 'em ups shouldn't have a soul. The old-school elements that make up such a videogame staple are simple, satisfying and rote. The side-scrolling view, enemies that blink away after being defeated and burgers that restore you to full health are gloriously arcade and archaic in origin and application.

But Tokyo Beat Down is different. It's not the varied gunplay amidst the repetitive combat. It's not the art-style or presentation which, although distinctly Japanese, isn't particularly remarkable. The single element that's made this my most beloved DS game is the translation.

Whoever worked at Atlus to bring this to the west should be given a medal for infusing it with more humour and personality than anything else on the DS.

Playing as the hotshot cop Lewis Cannon, the only English character in the game, you begin to investigate... well, just stuff really. The plot is as nonsensical as the archaic mechanics. Although you switch characters throughout the game, Lewis is the one that things centre around most often.

From the start the game doesn't take itself seriously - the name Lewis Cannon is just the start of the puns that get better and more ridiculous. His brash attitude and immature dialogue parodies the wise-cracking cops of 80's and 90's films. He loves being violent only slightly more than opportunities for showing off or running his mouth at passer-bys.

Equally, the other characters are suitably over-the-top with a hardcore attitude that has earned them the nickname 'Beast Cops'. They all play the same and there's many instances where some characters seemed to just be there to provide the punch line to the ever present puns.

I love that Tokyo Beat Down plays like an old videogame, but knows it. Inside jokes are everywhere. When a female cop remarks on 'stupid dudes lining up for the latest console' you know who they are talking about.

The end of boss fights usually brings out the best banter and on one occasion Lewis remarks 'I need someone else to interrogate now!' - such is his lust for violent law-enforcement.

All this personality brings together an experience which is rich in soul and character.

All this personality brings together an experience which is rich in soul and character, even though the elements underpinning Tokyo Beat Down for DS are shaky. Sure, it's repetitive and doesn't advance the beat 'em up past classics such as Double Dragon or Streets of Rage - but it honestly isn't meant to. If you're willing to let these concerns go and enjoy the sterling translation work that gives this game a personality unlike any other, then rewards await.

You can support Adam by buying Tokyo Beat Down