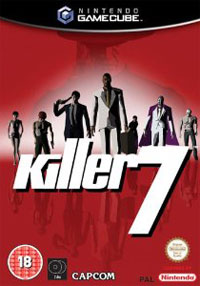 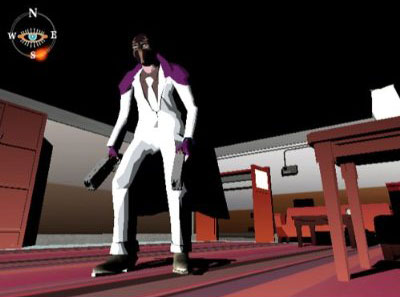 Killer 7 is strange, unexpected and unique. Presentation may be marred by pretentious storytelling and simple mechanics - but it still sent my mind reeling with its thought-provoking narrative and highly charged ending.

Controlling a squad of assassins - the titular Killer 7 - the game immediately gets you wondering if there are really seven killers or if it's just one guy with split personalities. In any case you're sent to eliminate a threat called Heaven Smile - monstrous creatures that blow themselves up while in fits of hysterical laughter.

It's a disturbing start and raises more questions than it answers in a Metal Gear fashion. The comparisons with Konami's opus don't end there. Metaphors fill this game to the brim as characters and situations are loaded with tangential suggestions and marginal references.

These mind stretching questions are where videogames really engage me. Combining this with a near-future premise of a political struggle between America and Japan means there's an opportunity to get deeply political and meaningful.

Killer 7 certainly doesn't stop short of this - and wades in with some pretty heavy commentary on current affairs. In places though, even amongst its simple shooting mechanics, it can get a little too blatant and pretentious. Overstated cleverness is not an attractive look regardless of whether you are creating a book, film or game.

Just when I thought Killer 7 was taking itself too seriously it throws in a dose of humour to draw attention away from the main plot.

Killer 7 saves itself from an ill fate by injecting some goofy humour into its story that lightens the grand standing and posturing. Just when I thought it was taking itself too seriously it throws in a dose of humour to draw attention away from the main plot.

It's a cute touch that keeps the game going on its 20 hour ride. With so many plots and subplots I found myself needing the crutch of humour just in order to keep up with events. Even then it was only after a second play-through that things started to become clear.

It doesn't quite reach the depths of Deus Ex but the earlier comparison with Metal Gear holds true. Sadly, the game play doesn't live up to either though with an odd mix of on-rails shooter and adventuring that felt empty and hollow. But alongside the complexities of the plot I was almost relieved to have the simple understandable combat. It served as a resting ground to grasp the story threads before I launched back into the plot.

The issues it raised stayed with me long after I'd switched the game off.

With its propensity for poking fun at American and Japanese culture, Killer 7 for the Gamecube merges humour and political commentary. The issues it raised stayed with me long after I'd switched the game off. In a genre that rarely tries to do anything more than offer a glorified shooting gallery I found Killer 7 to be a surprising breath of fresh, dark air. There's more meaning and thought behind this title than many others before or after it.

You can support Adam by buying Killer 7