Other GamePeople columnists have reviewed this from their perspective - huh?:
Touch Gamer (iPhone) 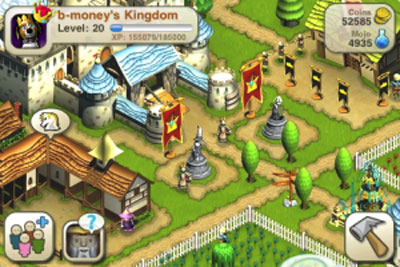 We Rule on iPhone is a gentle kingdom-building game, easily as addictive as Farmville on Facebook. While it lacks any real depth or meaningful objectives I found its persistent nature reason enough to care for my ongoing creations. Before long I was crafting my own iPhone/iPad/iPod Touch farming kingdom with as much care and attention as I had done with Rune Factory or Harvest Moon on the DS.

Despite having owned an iPhone for over a year I've never felt compelled to use it as a gaming device. Maybe its because I like to have strong barriers between what i consider to be a handheld gaming console and a smartphone. Or maybe because I think a lot of the games on the iPhone are just simply terrible. In any case I ventured into We Rule because it was free and I fancied a little pleasant looking time-waster for all those moments where interacting with real people just wouldn't do.

It didn't take long for my cynicism to be washed away and I found myself getting deeper and deeper into this flimsy Farmville knock-off than I thought possible. It helped that the mechanics of the game were ridiculously simple and ruling your own personal kingdom consists of merely planting crops, building structures and letting the gold trickle into your coffers. Being successful at farming ensures a steady flow of money to build up your kingdom further, expand your lands and earn you experience points.

In the same way that I was initially cynical and dismissive about Rune Factory, I've come round to enjoying We Rule just as much as the farming/dating sim on the DS.

This is all good stuff for those who enjoy a game that has little end point and doesn't really push you towards any defined objectives. It lacks the social connections of Farmville's Facebook structure and even after adding friends to your account you can't even send a simple text message to them.

None of this really matters to me. In the same way that I was initially cynical and dismissive about Rune Factory, I've come round to enjoying We Rule just as much as the farming/dating sim on the DS. I've found that taking things slowly, building up my farms and just allowing the pastoral experience to become a daily part of my life essential to making We Rule feel far more than it really is.

The fact that many of the crops take hours or days to grow is a feature that will irritate the impatient, but I find it adds a sense of longevity and legitimacy to the world. Yes, I could purchase 'Mojo', the magical substance that instantly grows crops to generate a large income quickly if I wanted to, but that feels much the same as putting a FPS into God Mode because you couldn't be bothered to play the game properly.

The world itself feels more like a slate of land rather than an interconnected series of kingdoms and for We Rule to prosper the sense of community has to be increased.

Taken in small bites like this I've found We Rule to be unusually enjoyable. It's addictive to a certain point but the real pleasure is sowing a few crops and coming back the next day to harvest them - not playing as a compulsive Farmville veteran.

With these free-to-pay games it's hard to criticise the content too harshly, but if We Rule could extend its gameplay through further (paid or unpaid) features then it would become a far more compelling experience. The world itself feels more like a slate of land rather than an interconnected series of kingdoms and for We Rule to prosper the sense of community has to be increased.

As for its soul? This will be entirely up to the player. Maybe the thought of designing and growing a small kingdom fills you with loathing. I myself but I couldnŐt help but find myself sucked into the process of crafting fields, laying down roads, building houses and making sure everything in my kingdom was laid out perfectly.

This kind of obsessive creation comes with a sense of ownership and although We Rule lacks a lot of features to make it truly worthwhile, I found it occupying a small and satisfying space in my gaming life.

You can support Adam by buying We Rule