Other GamePeople columnists have reviewed this from their perspective - huh?:
Teen Gamer (PC)
Frugal Gamer (PC) 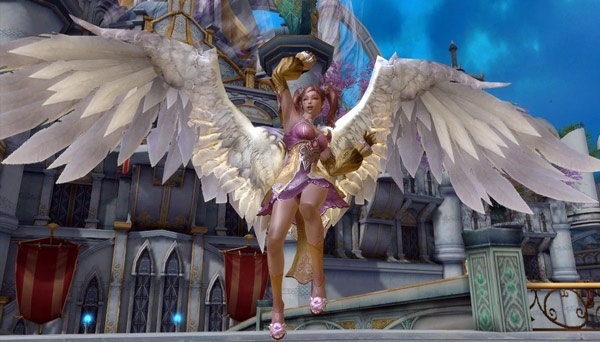 With the promise of a visually beautiful online experience and the unique ability of flight enticing me into its world, Aion: Tower of Eternity looked like it could be the MMORPG to bring me back into the fold after a two year absence. Unfortunately the excruciating banality of the first 25 levels meant that any promise of uniqueness was crushed under exasperation and boredom.

There was something magical about hearing the hype regarding Aion: Tower of Eternity. Its success in Asia and the distinct visual style evident in trailers and screenshots gave me the same buzz I experienced when waiting for Lord of The Rings Online (LOTRO) to release.

It’s that game which set the standard for MMORPGs in my mind. The balance of strong story-based quests and the right mix of additive game mechanics meant I came away with the same feelings a single-player RPG would elicit.

My first impressions of Aion were not great - the initial cut-scenes were immediately confusing and the story-based dialogue and quest structure left a lot to be desired.

But my first impressions of Aion were not great - the initial cut-scenes were immediately confusing and the story-based dialogue and quest structure left a lot to be desired. When it wasn’t descending to generic fantasy trope #3 it was being nonsensical and doing its best to muddy the narrative completely.

Granted, the visual appeal of Aion is amazing and I was constantly amazed at how wonderful the world looked; whether I was gallivanting in the Elyos opening area with its oversized exotic creatures and verdant landscapes; or questing in the Asmodian areas with their dark and bleak scenery - the game is a beautiful spectacle of light and nature. But this visual feast really covered up the painfully dull start I experienced with both races. Not only was the story lacklustre, but the simple process of levelling up a character took far too long even with the bonus XP amulet I was given at the beginning of the game.

I'm no stranger to the grind in MMOs or RPGs, but where other games wrap interesting story or engaging narrative around these game mechanics, Aion doesn't seem to even try. I'm the type of gamer who reads all the quest logs and information about the world so I can get fully ensconced it its lore and setting. That's what I loved about LOTRO so much - that the developers respected the source material and put so much of that into the game. Aion obviously doesn't have that rich heritage, but even other original MMOs like Free Realms or Fallen Earth have a far superior atmosphere and quest structure than what I experienced here. Sometimes it felt as if it was down to poor translation, other times it felt like the original developers idn't have the time to make it the story interesting.

I'm no stranger to the grind in MMOs or RPGs, but where other games wrap interesting story or engaging narrative around these game mechanics, Aion doesn't seem to even try.

It certainly doesn't help when you quickly run out of quests and are left with the hideous process of killing environmental creatures until you pass a certain level cap. Levelling up in Aion is some of the most soulless gaming I have ever experienced - akin to playing Hannah Montana: The Movie just for the Xbox 360 Gamerscore points.

Aion is not without its interesting additions though, and the inclusion of mini cut-scenes for plot-central quests is a nice touch. It gave me the feeling that what I did in the world mattered a little more than usual and it’s a neat way to bring in some solid narrative into an MMO game.

The biggest draw of the game for me was the addition of winged flight after reaching level ten. Having gone through many hours of grind this carrot was all that kept me going. The chance for my character to ascend was an awesome thought and the possibilities of aerial combat gave me hope that Aion could still draw a unique rabbit out of its dusty old hat.

Aion is not without its interesting additions though, and the inclusion of mini cut-scenes for plot-central quests is a nice touch.

Again I was disappointed. Not because of the visual drama that the cut-scene evoked - if anything I thought this marked a change in the game's narrative for the better and I actually started to feel interested in the world and the direction the game was going in. It was the technical restrictions that applied to this event that really soured my mood. I didn't expect to be able to fly all the time but the small limit that the game introduced felt completely arbitrary. There's no fun and no joy to be had from such a restricted feature, especially when the crux of the game is built on its inclusion. The real freedom I was hoping for didn’t come until level 25 when you enter the Abyss. Here the restrictions on flight are lifted but to be quite honest, by the time I had struggled to that stage I was sick of Aion and all it represented.

I'm aware that most people use MMOs as glorified chat-rooms or social hang-outs, but there are many other games that don't feel like so much hard work and actually reward you for putting over 25 hours of your time in. The unique pull of Aion with its visuals and aerial combat feels completely false to me now - the plot and world are muddled and I rarely felt as if I was travelling along a well-thought out path that had care or attention lavished on it.

Aion seems to sit uneasily between Eastern and Western design philosophy with its harsh levelling procedures and dull quest structures. None of its visual splendour can hide the fact that its poor storytelling and boring narrative are at the heart of its gameplay. I went into this game hoping to be inspired, but after twenty-five hours of play I feel more discouraged about the MMO genre and what it can deliver than ever before.

You can support Adam by buying Aion: Tower of Eternity