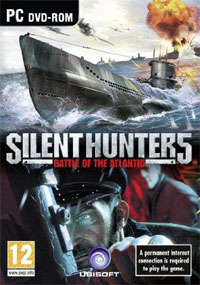 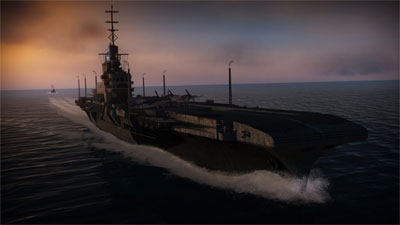 Silent Hunter 5 upsets its steady claustrophobia with an array of shortcomings. What is usually intense and compelling as you work ever closer to your goal, here becomes by turns laughable and frustrating.

In this 5th instalment of the Silent Hunter series, Ubisoft has created a monster of a submarine simulator - but not in a good way. Instead of infusing this classic franchise with the kind of quality that would make it a memorable and terrifying experience, the game is riddled with bugs and technical problems that drag it down to breaking point.

There's nothing quite like the niche environment of a Silent Hunter game. It's a PC-only world that constantly improves and supports the titles that are usually released in a buggy or broken state. It's also the kind of game that has its own atmosphere - a tension that combines the complex nature of running a submarine with the fear of being discovered.

Both of those aspects are in Silent Hunter 5. Unfortunately the latter far outweighs that of the former and any atmosphere or tension that I was hoping for is lost under a myriad of technical problems.

It's a series that's always enthralled me. What I always want from my sub Sims is a sense of tension. From the very first Silent Hunter game I've found them delivering an experience that's deeply involving and incredibly rewarding.

Nothing compares to pursuing your quarry over a course of hours, stalking enemy ships and finally pulling the trigger that sends death and chaos into their hull. It's a long arduous process that's incredibly rewarding - akin to out-strategising a formidable opponent in Company of Heroes for example.

There's no gung-ho Reaganite-patriotism that you get from Call of Duty or Medal of Honour here - partly due to the German perspective on proceedings. It's a slow deliberate crawl towards executing an end strategy that usually has me shaking in anticipation or fear at the critical point.

It's a slow deliberate crawl towards executing an end strategy that usually has me shaking in anticipation.

In fact, failure can sometimes be a more exhilarating experience as the realisation that you've been discovered, diving under the deep and listening out for the terrible depth charges creates a tension hitherto unknown in videogames. Silent Hunter 5 has flashes of these brilliance and its decision to streamline the story experience into a series of missions, rather than an open-world environment, gives the game a little more impact.

Set during the Second World War, the sense of place within the submarine is tight and tangible. In a new twist Silent Hunter 5 allows for some limited crew interactions. Though this means little more than just a variation of responses that sometimes give each character a back-history or information concerning their family back in the Fatherland.

I get the feeling that Ubisoft wanted this aspect of the game to be more Role Play Game in flavour. The morale system is meant to play into your interactions but for all the world I couldn't make head nor tale of what the mechanics were behind it. Also, even though a U-boat Captain would genuinely care about his crew and their morale, in this game it just doesn't quite flow right. It seems too divorced from the meat of the game and ends up being more of an annoyance than a feature.

It doesn't help that the interface is clumsy and - here's where the bugs start to really impinge on the general experience - controls for many aspects of the game are awkward and downright broken in parts. Operating the rudder was useless, ships would mysteriously disappear or respawn like the endless soldier closets from earlier Call of Duty's. Enemy AI was spotty and sometimes absent entirely and the biggest offender was watching enemy crew-members walk back and forth on their ships while the world blew up around them.

With such a litany of technical problems the soulful experience of Silent Hunter 5 for PC is buried deep under the waves.

The rudder controls and clumsy crew management I can tolerate for the wider experience but having something as simple as avatars unable to respond to the chaos all around them is unforgivable. This, more than anything, took me out of Silent Hunter's world. When I combined this with the brutal system requirements and a DRM policy that requires an on-line connection at all times, Silent Hunter 5 starts to look like a crocked vessel before it exits the dry-dock.

With such a litany of technical problems the soulful experience of Silent Hunter 5 for PC is buried deep. Even though the community that surrounds these games often patches them up to an acceptable standard its not good enough for a retail release to be this broken. It's by far the worst Silent Hunter game out of the gate and even though its potential is clear to be seen, it isn't worth the effort and time of anyone but the most ardent fan.

You can support Adam by buying Silent Hunter 5