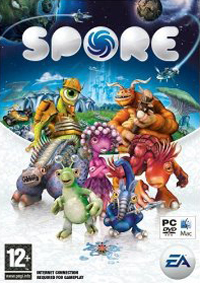 Other GamePeople columnists have reviewed this from their perspective - huh?:
Haiku Gamer (PC) 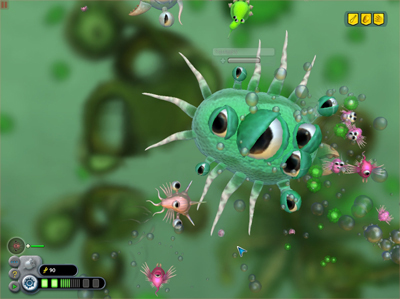 Spore trys to create a life opera, and should be ideal for my soulful videogame desires. But a lack of narrative, and an eventual reliance on old gaming tropes left me feeling like I hadn't been invited to the party.

Prior to its release in 2008, Spore was the most ambitious videogame title ever conceived. The idea of taking basic life-form, moulding it into any shape or appearance you desired, and then play the game of evolution all the way up to inter-galactic exploration was mind-blowing. It was a project that took Will Wright (the creator of The Sims franchise) and his team at Maxis Studios over five years to complete. Two years later I decided to delve back into the game and see if the negative reviews the game received at launch still obscure what could be videogames' greatest achievement.

I say that with no hint of irony because its aim and its scientific ethics mean that Spore could really break the barriers between the dry and excruciatingly dull education software and the more heart-thumping world of videogames. I had hopes that Spore could be the vanguard for a more mature, thoughtful genre of games with the same technical assuredness of Civilisation but the universal appeal of The Sims.

There's no doubt that the art-style Spore displays is utterly endearing. Even the most grotesque animals have a goofy demeanour and unerring charm that makes you love them like the virtual mother that you are. But even with all this I couldn't shake the creeping feeling of boredom as I worked my way through the stages of the game. Only at the end, after 12 hours of play did Spore evolve into an engaging space-exploration sim that piqued my interest enough to start caring about my creation and those of other players.

Briefly, the game is split into five distinct sections. You begin by creating a basic, water-dwelling life-form and take either a Carnivore or Herbivore path. In this cellular stage the game plays out almost exactly as Flow - the PS3 Network game that lets you evolve a variety of similar lifeforms into bigger ones. Spore is much more driven by tangible goals than Flow, in this case as you'll be attacking other creatures to eat them, or avoiding them whilst feeding off basic plant life. Filling up a DNA bar at the bottom is akin to levelling up a character in an RPG and once you hit certain points along the way, your little critter will grow in size and earn you enough points to let you put more parts onto its body. Once you reach the end of this DNA bar the game moves on to the next stage.

I had hopes that Spore could be the vanguard for a more mature, thoughtful genre of games with the same technical assuredness of Civilisation but the universal appeal of The Sims.

Now I could go into detail about the next three stages but the truth is you end up doing the same thing all the way through. You can either conquer or ally with other creatures, tribes or cities and once you've conquered/allied with enough you can move on to the next stage and begin the process again, just with more factors to consider.

The Civilisation stage is where Spore branches out into more complexity with its city management and the creation of your houses, entertainment centres and factories. Creating and designing your own buildings and vehicles sounded really fun, but by the time I had got here my appreciation of the game mechanics had started to dwindle. I've never played a game that depended so much on the time and creativity of the player to make it worthwhile, I rarely felt like making the effort.

If you're willing to spend hours fine-tuning your creation and putting real effort into their civilization with unique detailed houses and individual land, sea and air vehicles then Spore is an experience you'll want to have.

But I have to admit that I found the process of creation incredibly dull. Maybe I lack the creative drive to really get involved with the Spore creator like other people have. It's a blast seeing their creations enter my universe through an online connection and watching my own divine beings propagate themselves across the virtual stars. But the feeling I had nearly all the way through the game was complete apathy. Something about the art-style, the way the game connected the sections together and the overall lack of focus and direction gave me a very cold experience.

I found it difficult to maintain my interest. Each stage felt like stepping stones to a final destination with no narrative or consequence to make them compelling or worthwhile. They are, of course, there to get you to the final end-game section - the Galactic Stage - and it's here that I finally started to feel that Spore was hitting its stride.

Something about the art-style, the way the game connected the sections together and the overall lack of focus and direction gave me a very cold experience.

Away from the confines of your home world and tellingly, away from the close visual nature of your creation, the game unfolds into a much more interesting space exploration/strategy sim. Along with a few basic missions to drive the gameplay forward I found the process of discovering new worlds and seeking out lifeforms that other players had created to be far more interesting than the evolution of my own species. It definitely made it more personal that I had been there from the start of my creature's evolution.

The open-ended nature of the Space Stage also made the sandbox qualities of the game shine through. Although you essentially play as god throughout the game it's only here, at the pointy end of your species' evolution do you get to muck about with other races and civilisations.

I found I could easily abduct and transfer races from across the galaxy or I could crush a primitive culture or engage in large space battles as I saw fit. There was nothing particularly taxing about any part of this section but that also meant I was free to explore and do as I wanted.

It took a common videogame conceit to make Spore feel like the kind of game it really should have been.

But the most telling part of the Space Stage was the loose structure of missions. It showed that the natural progression of the previous game sections hadn't worked - it took a common videogame conceit to make Spore feel like the kind of game it really should have been.

And there's the overall problem with Spore. For those first eight hours I was terribly bored, trying to find some 'game' or interesting experience. Only when it branched out into a Galactic view and gave me a few skeleton videogame structures did I begin to enjoy myself. But the crushing truth was I knew I would have had more fun playing Civilisation IV or Sins of a Solar Empire for the same amount of time.

It's true that both of those are more videogame-like and contrived than the hugely ambitious Spore is, but even for me with my focus and emphasis always on a deep and meaningful experience, I didn't get any sort of worthwhile memory from this game. It's incredibly ambitious and succeeds in creating a game that demonstrates the process of evolution - but is it fun? No, and neither does it feel full of heart, life and soul that the shaping and creation of life should be.

You can support Adam by buying Spore