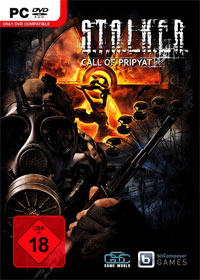 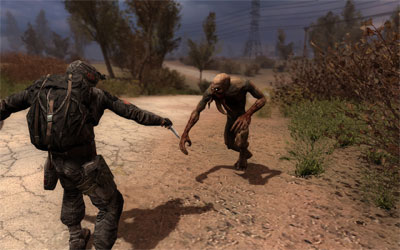 Stalker: Call of Pripyat is the pinnacle of the unsettling and buggy trilogy set within the wasteland surrounding the Chernobyl reactor. Its technical competence vastly improved my experience and made the third instalment of the series the most memorable and disturbing of them all.

As a veteran of the Stalker series - after playing through both Shadow of Chernobyl and Clear Sky - the fabled Exclusion Zone that surrounds reactor B has become a familiar place to me. Familiar, yet still full of unsettling moments and dreadful horrors just waiting to pounce upon my highly-strung nerves.

Here you find yourself playing as Alexander Degtyarev, a security agent for the Ukrainian military. Investigating the crash of three military helicopters within the Zone, the game does a much better job of actually pushing the storytelling part of the experience to the fore than previous efforts. It still feels like the game is tied together with baler twine at times but that, as ever, is what gives Stalker its uncomfortable and disturbing soul.

This sense of dread makes the encounters with the freaks of nature in the Zone all the more terrifying and memorable.

Though quality has been improved it's only in the latter stages of the game that the narrative begins to coalescence. Stalker starts with the familiar awkward dialogue and lack of direction. As much as I love their dark and unsettling nature, sometimes those bugs make it very difficult to be totally drawn in.

The story of each Stalker game has been the least interesting aspect. The real pleasure is when I'm out in the Zone wilds, creeping through the chilling environments and anticipating what horrors might be in store for me over the next hill. It's this threat of attack that provides the biggest thrill. Just as the radiation affects Alexander's health, I found my own terror slowly affecting me as I skulked through dark caves and dared to cross the wastelands at night. This sense of dread makes the encounters with the freaks of nature in the Zone all the more terrifying and memorable.

Never knowing whether that next building will provide horror or refuge turns Call of Pripyat into the nerve-shredding experience that affected me so much. The sounds of distant barking dogs will sometimes give you warning of imminent attacks but other times the dark of twilight carries with it new and silent terrors. Creatures like the Burer or Chimera that jump out of the dark with alacrity and never failed to draw a terrified yelp from my lips.

The bleak nature of the environments and the ever-present threat of death in all its horrific forms keep the experience fresh and disturbing.

With the environments pregnant with such tense and unpredictable enemies the small pockets of refuge become beacons of hope and humanity within the Zone's harsh grip. I found myself drawn to these areas far more than in previous games and venturing out to complete the missions required great thought and planning - akin to a real expedition into the wilds of nature.

This dark soul is tarnished by some technical problems that come hand in hand with most Eastern European games. The AI of human enemies is unerring accurate at times and reminded me that the foibles of the Stalker series don't always add to its character. The voice acting conveys Ukrainian accents well enough but the dialogue feels like it was written by an 18 year old Jersey jock rather than being translated from the original Russian. When I stumbled on a new encampment, being called a 'retard' by someone in a thick accent was more hilarious and game-breaking than any geometry bug.

Call of Pripyat is a foreign art-house film that makes you work before you can enjoy its riches.

Even though the story improved in the last quarter, it was still the ever more familiar environments that created the best of the experience. Call of Pripyat's side missions and artifact gathering added to the world and made me traverse areas of the Zone without way point markers - a real hunt full of risk and reward. The bleak nature of the environments and the ever-present threat of death in all its horrific forms keep the experience fresh and disturbing.

You can support Adam by buying Stalker Call of Pripyat