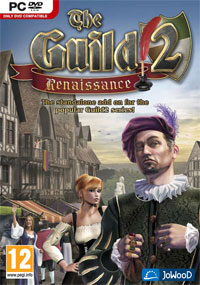 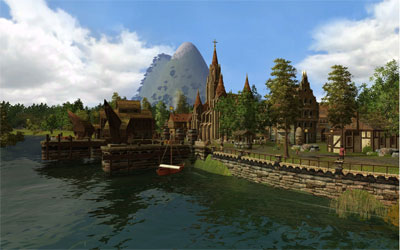 The Guild 2: Renaissance hints at the minutiae of business, but struggled to connect me to what lay beneath a bewildering interface. This may well be a game with a intricate soul, I never quite managed to find out.

This standalone expansion to The Guild 2 brings a range of improvements to the original game, offering more professions, buildings and scenarios that take you through the Renaissance period. Unfortunately, this is masked by an inaccessible interface that makes the act of playing this for anyone other than an enthusiast virtually impossible.

The idea of playing an economy and political simulator didn't fill me with excitement at first. I'm already self-employed so I have enough experience of building a business from scratch - playing a game of it, no matter the time period, didn't exactly appeal. Putting my misgivings aside I was struck with how compulsive this kind of game could be - taking a singular profession and building an empire out of it - started to make those entrepreneurial neurons fire with delight.

Some of that curiosity comes from the variety of professions you can assume and how that changes the game play and the choices you subsequently make. Unfortunately this variety and the basic game play was so well hidden behind confusing and impenetrable menus that it was impossible to figure out.

I've played a few strategy games in my time but nothing prepared me for how obtuse The Guild 2: Renaissance was.

I've played a few strategy games in my time, including some off-beat and niche titles that dealt with Railroads and Hospitals, but nothing prepared me for how obtuse The Guild 2: Renaissance was.

Not a million miles away from the Settlers series, it's obvious that this is a very in-depth game and when you're faced with such a title, a tutorial is essential for all players to familiarise themselves with the game's systems. It even states in the manual that this option is available but it appears that the developers simply forgot to put it in - a criminal offence with such a deep title.

As such, it took me several unsuccessful campaigns to figure out the most basic tasks like making products and setting up trade routes. It was clear that many more complex tasks were available to me - and indeed essential in order to win the game - but none of the menus gave any hint as to what actions I should take or how to go about doing them.

I could tell that the complexity and depth of the various systems might reveal a game full of interesting choices, or of political intrigue that might hint at its soul.

I was looking forward to getting my hands dirty with the business aspect, of challenging rivals and defeating them in commerce - but the game stolidly refused to be anything approaching accessible.

I could tell that the complexity and depth of the various systems might reveal a game full of interesting choices, or of political intrigue that might hint at its soul. But time and again I found my experience washing up against the game's closed-to-outsiders attitude.

After many hours of play it became clear that this is an expansion solely intended for fans. The lack of a tutorial makes it obvious that the developers aren't targeting periphery strategy players. I can only hope it serves The Guild 2 fanatics better than me.

You can support Adam by buying The Guild 2: Renaissance