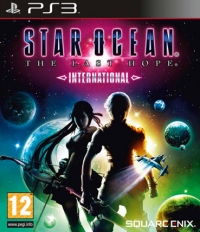 Other GamePeople columnists have reviewed this from their perspective - huh?:
Microcosm Gamer (PS3) 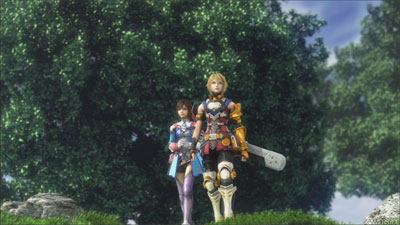 Star Ocean: The Last Hope PS3 is the worst RPG I've played. Lacking in soul, story and narrative this is a painful experience with a cliched cast and a predictably storyline. The beautiful environments and challenging battle system offer a bit of relief but the overall experience lacks anything approaching soul.

I imagine this is hardly the best way to become acquainted with the Star Ocean series being that it's the most confusing of them all. The Last Hope is a narrative prequel which should fill in the back story to both characters and universe in a pleasing way. Except it doesn't.

The game starts off well enough with a dramatic and impressive cut scene showing the Earth being destroyed by two squabbling superpowers setting off a nuclear Armageddon. With the fate of the planet sealed the survivors of the catastrophe go underground until warp-power is invented and leads humanity to leave Earth and start again on another planet.

It's a plausible, if cliched, setup that immediately got my attention and encouraged me to pour several hours into Star Ocean before thinking twice. You see, as much as Star Ocean feels like a well-polished and thought-out RPG with an interesting battle system and luscious environments, it simply lacks focus and execution.

The story unfolds predictably and requires you to work through a tremendous amount of exploration and dungeon crawling to advance the plot.

For a start most of the characters are incredibly irritating JRPG cliches. The main protagonist, Edge Maverick (yes that's right Edge Maverick) has such awful dialogue that I never felt any empathy for him or anyone who knew him.

The story unfolds predictably and requires you to work through a tremendous amount of exploration and dungeon crawling to advance the plot. Usually this wouldn't bother me if the reward was adequate but when we're talking upwards of two hours to get through a section with no save points then Star Ocean starts to push the eject button for me.

The reward for my efforts should be - should be - some interesting characters, a dramatic and emotional story or even a satisfying battle system - something with a little soul.

Lost Odyssey suffered from similar save point and pointless treasure hunting mechanics, but it had the story and characters to carry it off.

The overgrown wilds of the forests, long sandy beaches, icy mountains and highly-advanced ships all provided atmosphere... up to point.

There was a smidgen of relief in the environments you traverse. The overgrown wilds of the forests, long sandy beaches, icy mountains and highly-advanced ships all provided atmosphere. But still there's a nagging soul-less feel to the experience as a whole that never sat well with me.

This might seem a little personal but Tri-Ace have never developed an RPG that I've particularly enjoyed. Characters and story aside their games share an art-style I object to. The depiction of corridors, computer consoles, platforms - all man-made objects within their games have a certain glare or sheen that hurt my head. It's a similar reaction to that of Prototype or Darksiders but more pronounced with the Japanese aesthetic.

You get to a certain point in Star Ocean: The Last Hope and you realise that its trying to incorporate a dating Sim within its mechanics. Navigating numerous cut-scenes and dialogue options unlocks individual character endings. I've heard that older Star Ocean games have a similar mechanic but in The Last Hope's it feels overly forced.

This mess of a game offers so little in positive features that I feel like I've completely wasted my time playing it. Even turning off so many game play, dialogue and narrative switches in my brain to try and get to the inner essence of Star Ocean leaves me thinking this game was a joke - a mashed together collective of ideas that nobody really cared to make interesting or fun.

I know there are fans of this series and maybe even fans of this game but my experience of Star Ocean: The Last Hope for PS3 was nothing short of painfully dull and tedious. There are plenty of bad RPGs that have more soul in their broken game design than this poorly constructed entity and I'd encourage everyone to stay away from this soulless monster.

You can support Adam by buying Star Ocean: The Last Hope