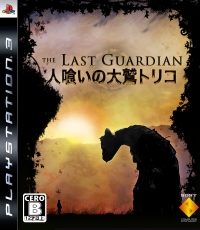 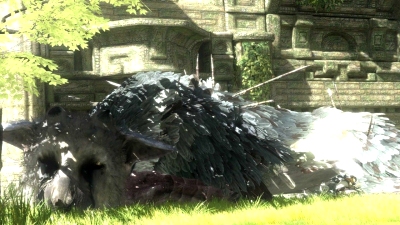 The Last Guardian manages to carry the expectation placed on it with ease. Intriguing and mature, but still very much a videogame if there is an eternal soul to our hobby Ueda has its pulse.

In terms of gaming developing into something deeper, Fumito Ueda's Ico and Shadow of the Colossus, and Jenova Chen's Flow, Flower and The Journey offer hope of more substantial things just around the corner. They are joined by the bedroom genius of Jonathan Blow's Braid and Play Dead's Limbo to complete a pantheon of interesting experiences.

The fact that Ueda's next game, The Last Guardian, is so hotly anticipated is perhaps a sign of how early we are in the development of videogames. In the absence of other bright lights though, The Last Guardian is a big deal for gaming grown-ups.

It's a game that draws on Ico's partner leading play and Shadow of the Colossus' encounters with mythical monsters. This brings it to arrive upon Trico, the mouse-dragon (ed: cat-eagle?) creature you play alongside in the game - as a friend rather than foe.

How this will work in detail is still being fleshed out. But the boy you play is charged with guiding Trico through the world and feeding him barrels, while he in turn looks out for you. We see in the original E3 Video and more recent TGS Video how Team Ico create a surprisingly rich range of emotions from the creature in all sorts of locations.

Early commentators made light of the expected demise of such a legendary and endearing creature as Trico. What better way to cash in all that sentiment between player and companion than to sever it surprisingly towards the end of the game.

This, it seems was a little too eager. Ueda has made clear that this is a much more open game than either Ico or Shadow of the Colossus and the ending will not be nearly as heavy handed.

But this is not to say that it will be lacking of the depth of the bond between the boy and his guardian - although who is guarding who may well serve as the subtext for the experience. And it's a theme that is somehow mirrored in the look of the game - somber shades and dark corners invite players to investigate as much as they warn of danger.

The Last Guardian is the first Team Ico game for the PS3 - although ex-team members worked on Majin and the Forsaken Kingdom (PS3) - so they are able to introduce new ways to interact with the environment. Shadow of the Colossus had a ground-breaking climbing mechanic that enabled players to scale the landscape, as well as the massive beasts, in their own fashion. In The Last Guardian these sorts of interactions abound - and create the game's more open sensibilities.

Perhaps most surprising in a world of videogames where the focus is always on the new and the next, is Ueda's transparency about drawing on old ideas. He has talked about The Last Guardian as a project that's seed germinated at the end of Shadow of the Colossus' development when he realised he could connect that and the older ICO game to create something different.

It's an openness that says as much about Ueda's confidence in his ideas as it does about his unique approach to games. He's quite happy to talk about his games stemming from very simple ideas - Ico from a picture of a boy leading a friend home and Shadow of the Colossus from an image of a small boy stood in front of a giant.

It's this simplicity that allows his games to have so many themes to be laid at their feet - although these often give away as much about the player as they do the game. In this way The Last Guardian is a grown up experience, but one that (like the other Team Ico games) ironically stars a juvenile.

When asked if this is intentional, Ueda makes it clear that this is a simple coincidence for him and a result of wanting to create interesting power dynamic in the game relationships - something we see again in the Trico-boy miss match.

But as well as this I think it says something of the maturity of these experiences, and the general immaturity of big budget videogames, that they need no grandstanding or puffing up - but a small boy is chosen to carry the emotional weight.

I'm looking forward to playing The Last Guardian and seeing what emotions is raises in me.


You can support Adam by buying The Last Guardian